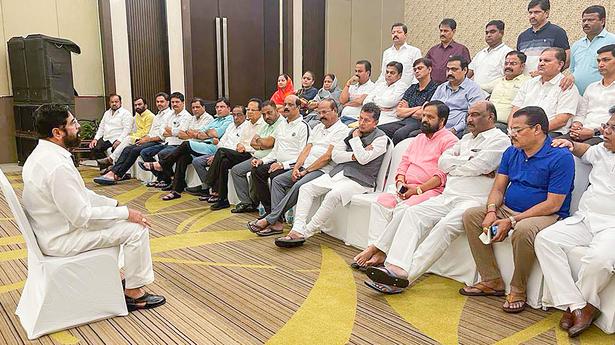 Days after his revolt against Chief Minister Uddhav Thackeray and the tripartite Maha Vikas Aghadi (MVA) government, rebel leader Eknath Shinde on Thursday accepted that the entire operation is supported by a “national party”, without naming the Bharatiya Janata Party (BJP).

In a major step towards re-establishing its presence in Afghanistan, India sent a “technical team” of officials to be based in Kabul, reopening its Embassy on Thursday. India also sent its first consignment of earthquake relief assistance to Afghanistan, where more than 1,000 Afghans have been killed in an earthquake outside the city of Khost.

A letter from rebel MLA Sanjay Shirsat, representing Aurangabad West constituency, to Chief Minister Uddhav Thackeray on Thursday slamming the coterie surrounding the latter is a repeat of historical events for the party and also an indication that things have remained the same despite periodic shocks to the party in the last three decades.

Blaming “selfish actions” by western countries for the economic crisis arising due to sanctions, Russian President Vladimir Putin called for the strengthening of the Brazil-Russia-India-China-South Africa (BRICS) grouping with other countries pursuing an “independent policy” at a virtual summit of BRICS leaders hosted by China, Prime Minister Narendra Modi and other leaders discussed the situation in Ukraine and Afghanistan on Thursday.

The YSR Congress has announced its support to the candidature of NDA’s nominee Draupadi Murmu for the post of President of India in the July 18 election.

2.8 lakh people marooned in Assam town for almost a week

Floodwaters have refused to drain out from a southern Assam town where about 2.8 lakh people have been marooned for almost a week.

Asked whether U.S. President Joe Biden would press Prime Minister Narendra Modi “to protect” India’s Muslims, when the two meet virtually in July at a summit, White House Press Secretary Karine Jean-Pierre did not say he would, but said that President had “no problem” talking human rights with foreign leaders.

The Kolkata Police summoned suspended BJP spokesperson Nupur Sharma on June 25 in connection with her comments on Prophet Mohammad, which triggered widespread violence in parts of West Bengal, an officer said on Thursday.

Restrained by a Division Bench of the Madras High Court at the crack of dawn from taking any decision on restoring unitary leadership in the party, the All India Anna Dravida Munnetra Kazhagam (AIADMK) executive and general council that met under chaotic circumstances on the outskirts of Chennai on Thursday could not deliberate on the demand for electing former Chief Minister Edappadi K. Palaniswami as its supreme leader.

Following an upsurge of COVID-19 cases in some States, Health Minister Mansukh Mandaviya chaired a meeting with key experts and officials on Thursday to review the situation.

Bypolls to three Lok Sabha seats — Azamgarh and Rampur in Uttar Pradesh and Sangrur in Punjab — were held on Thursday. It is a crucial test for both the Samajwadi Party and the Aam Aadmi Party. The results, which will be declared on Sunday, will reveal if the Samajwadi Party, in spite of its defeat in the Assembly elections, can hold on to its bastions.

BJP is destabilising the Maharashtra government, with an eye on Presidential polls: Congress

Asserting that the Congress party stands with the Maha Vikas Aghadi (MVA) in Maharashtra, Leader of the Opposition (LoP) in the Rajya Sabha, Mallikarjun Kharge, on Thursday said that the BJP was trying to bring down the government in the State with an eye on the Presidential polls.

The Congress on Thursday targeted the Narendra Modi government on the question of freedom of speech over the now deleted tweet by Captain Bana Singh (Retd.) against the Agnipath recruitment scheme.

Prominent Indian-American legal expert Anjali Chaturvedi has been nominated by US President Joe Biden as General Counsel in the veterans’ affairs department, the latest from the community to be named for a key position in the administration.

The Reserve Bank on Thursday proposed norms for the outsourcing of IT services to ring-fence banks and other regulated entities from financial, operational and reputational risks.

The Reserve Bank of India (RBI) has appointed Venkat Nageswar Chalasani as a member in the advisory committee of Srei Infrastructure Finance Ltd. (SIFL) and Srei Equipment Finance Ltd. (SEFL).

The Election Commission on Thursday expressed its “displeasure” with Punjab government officers for seeking a last-minute extension to the polling hours for the ongoing Sangrur parliamentary seat by-poll.

The Supreme Court said on Thursday that Americans have a right to carry guns in public, a major expansion of gun rights.

Ukraine said on Thursday that its troops lost control over two settlements in the eastern Donbas region where it is fighting fiercely to retain control of the twin cities of Severodonetsk and Lysychansk.

More than 1.2 million tickets have been sold for Qatar’s 2022 FIFA World Cup, organisers said on June 22, 2022. The most recent phase of ticket sales, a random selection draw, closed at the end of April with 23.5 million ticket requests coming in largest numbers from Argentina, Brazil, England, France, Mexico, Qatar, Saudi Arabia, and the United States, according to FIFA, world football’s governing body.

Cristiano Ronaldo signs for Binance in a bid to push NFTs

Binance, the world’s biggest cryptocurrency exchange by trading volumes, said on Thursday it has signed a partnership with Cristiano Ronaldo for the promotion of non-fungible tokens (NFTs).

Stuart Broad led England’s attack in the absence of James Anderson before New Zealand lost Henry Nicholls in bizarre fashion on the opening day of the third Test at Headingley on Thursday.