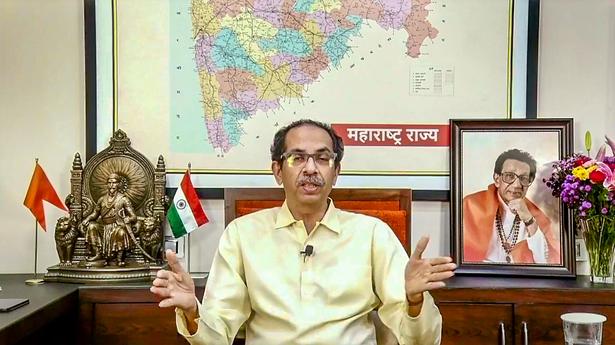 A revolt against Maharashtra Chief Minister Uddhav Thackeray by his second-in-command and senior Minister Eknath Shinde has turned into a battle to control the party. Mr. Thackeray on Wednesday said that he would quit the Chief Minister’s post and even the party’s top position if his party workers told him to do so to his face.

India’s digital economy and the infrastructure sector have a total potential of $2.5 trillion, Prime Minister Narendra Modi said on Wednesday. Addressing the meeting of the BRICS Business Forum, Mr. Modi said the digital transformation unfolding in India has never before been seen on the world stage.

JD(U) leader and Bihar Chief Minister Nitish Kumar on June 22 welcomed the National Democratic Alliance decision to name tribal leader Droupadi Murmu as its Presidential nominee. The Chief Minister said Prime Minister Narendra Modi had called him to inform him of the decision.

After arresting 45 persons and remanding them in judicial custody on Sunday, of the total 56 identified accused persons in the Secunderabad railway station violence against the Centre’s Agnipath scheme, the Secunderabad Government Railway Police on Wednesday arrested 10 more persons.

‘If you want me to quit, tell me on my face,’ Uddhav tells rebel Sena MLAs

Faced with a revolt within the party, Shiv Sena president and Maharashtra Chief Minister Uddhav Thackeray on Wednesday asked rebel Eknath Shinde and MLAs to come to Mumbai and tell him to quit from the post on his face instead of hiding somewhere out of Maharashtra.

Even as Shiv Sena leader Eknath Shinde’s intra-party rebellion attracted more MLAs and split the party wide apart, MLA Nitin Deshmukh returned to Maharashtra while alleging a conspiracy on the part of the Bharatiya Janata Party (BJP) and Gujarat authorities to abduct and harm him

In his first comments after five days of questioning by the Enforcement Directorate (ED) in a money laundering case, former Congress chief Rahul Gandhi said a leader who fights for the truth is neither scared nor threatened.

Murmu to file nomination for Presidential polls on June 24

Rairangpur basks in the glow of Droupadi Murmu’s Presidential nomination

From a nondescript town in one of Odisha’s backward regions, Rairangpur overnight finds itself basking in the glow of the national spotlight. It will now forever be known as the home of Droupadi Murmu, who’s almost certain to be the next President of India.

As the world’s most developed economies meet for the G-7 summit this weekend to discuss their next move against Russia, Prime Minister Narendra Modi will also fly to the German Alpine resort of Schloss Elmau as a special invitee to the meeting on June 26-27, the Ministry of External Affaris (MEA) announced on Wednesday.

Rain and snow lead to Kashmir floods; 2 missing in Pahalgam

Heavy rains in the plains and snowfall in the upper reaches on Wednesday left most rivers and tributaries in J&K in space and triggered flash floods; there was an inundation of residential areas and closure of highways. Two persons went missing in south Kashmir’s Pahalgam, where a group of tourists was left stranded due to the inclement weather.

India reports CAD of 1.2% of GDP in FY22 on widening trade deficit: RBI

‘Air India’s future under Tatas positive, but not without challenges’

Air India’s future under Tatas is positive, but will require a lot of work, which makes for an interesting challenge for the new CEO Campbell Wilson, IATA Director General Willie Walsh said.

The Athletics Federation of India’s selection committee had a scheduled meeting on Wednesday, ostensibly for other reasons but the focus remained on high jumper Tejaswin Shankar after the Delhi High Court directed the federation to consider him for the Commonwealth Games.

As Russia’s access to its traditional markets of exports and imports is hugely limited, if not blocked, following its Ukraine invasion and the subsequent sanctions, Moscow is pushed to develop new trade and investment relations with partners in Asia, including India, China and Southeast Asian countries, said Russian aluminium tycoon Oleg Deripaska.

Former India women’s team captain Rumeli Dhar on Wednesday announced her retirement from all forms of the game. The right-handed batter and medium-pacer announced her decision through an  Instagram post.

On the back of his recent exploits, veteran Dinesh Karthik jumped a massive 108 spots to 87th on the latest ICC T20 rankings for batters, even as young opener Ishan Kishan broke into the top 10.

Jason Roy struck 101 and Jos Buttler smashed a 64-ball 86 as England chased down a target of 245 with 119 balls to spare to win the third one-day international against the Netherlands and clinch the series 3-0 on Wednesday.