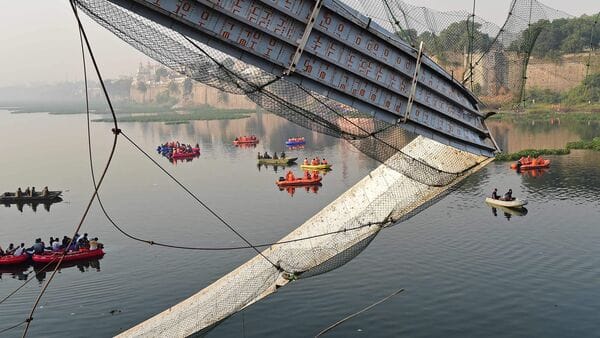 Rajkot MP Mohan Kundariya lost 12 of his relatives in the tragic bridge collapse incident Gujarat’s Morbi town. The MP told PTI that They had gone to visit the picnic spot on Sunday when the tragedy took place.

“Four daughters of the brother-in-law of my elder brother, the husbands of three of them and five children were killed in the accident,” Kundariya said

“As it was Sunday, they had gone to the picnic spot where the tragedy occurred. I reached here half-an-hour after the incident took place and have been at the spot since yesterday, helping in the rescue work,” the MP said.

At least 134 people were killed after a suspension bridge collapsed into the Machchhu river in Morbi on Sunday evening, according to police.

Kundariya asserted, “So many people have been killed. We will take strict action against those responsible for the incident.”

He also informed Gujarat Chief Minister Bhupendra Patel was camping in Morbi after the bridge collapse incident. “We will ensure that nobody responsible for the loss of so many lives is spared,” he said.

The nature and scope of the tragedy has shaken the nation. The Morbi district website described the suspension bridge as an engineering marvel built at the turn of the century, which reflects the progressive and scientific nature of the rulers of Morbi.

This was built to give a unique identity to Morbi using the latest technology available in those days, in Europe. The bridge was 1.25 metre wide and spans 233 metre on the Machchhu river connecting Darbargadh Palace and Lakhdhirji Engineering College, it says.