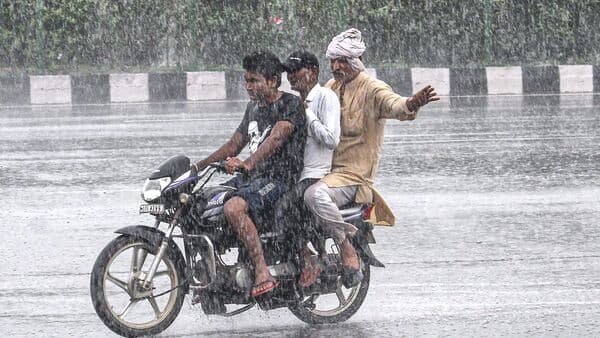 Delhi witnessed light to moderate rainfall on Sunday, keeping the maximum temperatures below normal, as per the India Meteorological Department (IMD). It added that precipitation will continue in the national capital over the next six days.

The IMD issues a yellow alert to warn about a weather phenomenon occurring in a region.

In case of rain, it is generally upgraded to ‘orange’ if moderate to heavy rainfall, or strong winds, are expected. A red alert is issued if very heavy rainfall is expected over a region, or an extreme weather event is expected.

Delhi’s base weather station Safdarjung recorded 0.1mm of rainfall between 8:30 am and 5:30 pm on Sunday. The national capital recorded 1.9mm of rainfall on Saturday and 117.2mm on Friday, making the monthly total 119.2mm so far. As per weather experts, the normal monthly average for July is 210.6 mm.

As far as Delhi’s other stations are concerned, according to the official data, Lodhi Road recorded 4.8mm of rainfall, Ridge 7.6mm, Ayanagar 14.8mm, Delhi University 5.5mm, Jafarpur 3mm, Pitampura 23mm, Pusa 6mm and Mayur Vihar 11mm between 8:30 am and 5:30 pm.

The arrival of monsoon in Delhi was declared on Thursday, with Delhi recording 117.2 mm of rain in a span of 24 hours, pushing the temperature down significantly and giving the city its coolest day in 116 days on Thursday.

RK Jenamani, scientist, IMD said that northwest India and Delhi will continue to witness monsoon rains throughout this week, with intensity expected to be strongest on Wednesday. Delhi will receive more moderate to heavy rainfall this week, he added.

Coming to the minimum temperature, Delhi recorded a low of 26.2 degrees Celsius — two notches below normal for this time of the year, while relative humidity oscillated between 62 and 83%.

As per IMD, Delhi on Sunday recorded a maximum temperature of 35.7°C — one degree below normal, and a minimum of 26.2°C — two degrees below normal.

The maximum temperature is expected to be around 36 degrees on Monday, while the minimum will hover around the 27-degree mark.

According to the Central Pollution Control Board’s (CPCB) daily 4 pm bulletin on Sunday, Delhi’s air quality continued to improve with an air quality index (AQI) reading of 76 (satisfactory) which was 95 at the same time on Saturday.