Milind Soman shows the incredible way to deal with laziness 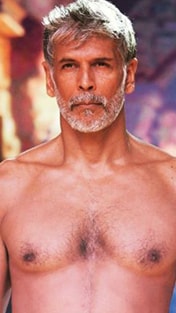 Maintaining a shredded physique along with an immense amount of strength that too in your 50s is not everyone’s cup of tea, but actor Milind Soman proves that it is not impossible either.Milind has familiarized us with his hyperactive lifestyle on numerous occasions. From running on a beach to mark his 55th birthday to covering 1000 kms on a cycle, he has never failed to wow his fans with his incredible determination.

But this time, the fitness enthusiast has touched upon a very relatable issue that bothers everyone in their fitness journey. Sharing a video on his Instagram page, Milind admitted in the caption that he was feeling too lazy to do pull ups “even though #fightlazy is on top of my mind,” he wrote. However, displaying his sheer dedication, Milind further wrote that he chose to do a set of hanging leg raises instead. “Was fun,” he added.

It was evident from the video that Milind did not really have any plans to workout that day as he opted for a casual t-shirt and a pair of blue jeans. With a dynamic song playing in the background, the video began with Milind grabbing a pull-up bar in a park.

He started by hanging straight from the bar before drawing the strength from his arms to bring his legs upward. The fitness freak, who seemed to have ditched his shoes for the exercise, then continued to elevate his legs until they reached above the bar.

Astonishingly, Milind did not touch the ground even once for the whole exercise and pulled off several repetitions of the leg raises while maintaining an incredible posture. He then finished his intense workout without breaking a sweat and gracefully smiled for the camera at the end of the video.

Earlier, Milind had also shared his thoughts on fitness while elegantly flaunting his toned muscles. In one of his Instagram posts, Milind could be seen putting his buffed-up triceps to display.

Further talking about the role of diet in a healthy lifestyle, he had written that fitness is not about restrictions but freedom. “But as we all know, with freedom comes great responsibilities,” he added.