More
HomeSportsMessi is playing like a 20-year-old: Gabriel Batistuta
Sports 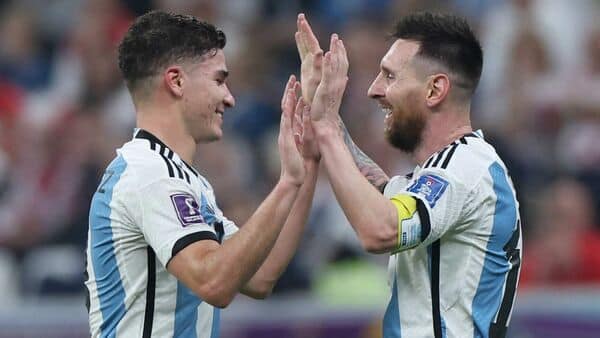 Gabriel Batistuta had different types of expectations from Lionel Messi in FIFA World Cup 2022 but Leo has apparently surprised him. The former world cup star from Argentina expected the 35-year-old to be “much calmer” in this tournament because of his age and experience. But, that’s not what happened so far.

“I expected him to be much calmer, but he is playing like a 20-year-old. And, that’s because he’s hungry, he’s here to win the Cup. That’s what football needs, that’s what Leo is spreading to the whole team,” said Batistuta who had held the record of scoring the highest number of world cup goals for Argentina before Messi scored his 11th world cup goal in the Croatia match.

The 53-year-old former footballer said he was happy to see Messi overtake him. Messi deserves to be Argentina’s highest scorer at the world cup, as per Batistuta. “If there’s one person who has to be up there, it’s him,” he said.

Messi is a person who plays football better than anybody else; he is not an alien, Batistuta said, when Leo surpasses someone, they cannot suffer; all he does is make people happy.

Shortly before the FIFA World Cup 2022 final, Batistuta believes Argentina can defeat France. He thinks Lionel Scaloni’s team have “all the conditions to take the title”. “There’s something in the atmosphere, a positive energy, for this to happen. For Messi and for the fans too,” he said.

Messi, along with Kylian Mbappe, is presently the leading goal-scorer in this world cup. While both have scored five goals each, Messi has three assists under his belt whereas Mbappe has two.

While Messi seeks to top off his illustrious career with the one major championship that has escaped him, France are attempting to become the first side to win back-to-back world cups since Brazil in 1962.

The cheapest tickets for the final on the secondary market are selling for more than $4,000 ( ₹3.3 lakh) as excitement for the matchup between Argentina and France reaches fever pitch.