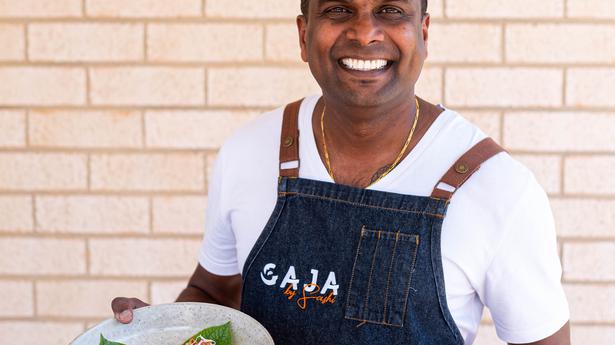 Sashi was the winner of MasterChef Australia Season 10. This will be his first restaurant in India, in T Nagar, serving Peranakan cuisine and lemongrass cocktails

Sashi was the winner of MasterChef Australia Season 10. This will be his first restaurant in India, in T Nagar, serving Peranakan cuisine and lemongrass cocktails

Police officer turned MasterChef contestant turned chef turned restaurateur Sashi Cheliah seems apologetic about his requirements for his first restaurant in India. “The thing is, we need professional chefs for this project,” he says, over filter coffee at the Leela Palace lobby, glittering with chandeliers and fragrant with vases of marigolds.

In Chennai with World On A Plate, Sashi is relaxing after cooking seven-course degustation menus, two nights in a row, for completely sold-out dinners at The Leela Palace. Then, true to form, the Singapore-born, Adelaide-based chef headed straight from the five-star kitchen to Chennai’s popular Erode Amman Mess for his own dinner. “It was fantastic,” he says, “When it comes to flavour there are so many great places to eat in this city.”

With roots in Tamil Nadu, including grandparents who came from Madurai, he has chosen to launch his restaurant, Pandan Club, in Chennai. A post on his Instagram profile, which has 1,29,000 followers, announcing openings for kitchen personnel resulted in a storm of resumes: many from fans and amateur cooks.

Explaining why he is insisting on a seasoned team for the restaurant, scheduled to open in August, Sashi says the fine dining space will serve Peranakan cuisine with cocktails. “The Peranakans are Chinese who adopted Malay culture, so there is a strong Malaysian influence in their cooking,” says Sashi, adding, “There is a significant difference in the way they use ingredients — a lot of fermented soy beans, fermented black beans and buah keluak, poisonous in its original form, but used as a spice when cured.” The food, which requires skill and patience to make, he says, has a “strong umami flavour, and is also very earthy”.

Despite the unfamiliar flavours, Sashi is confident that the Indian palate will appreciate the cuisine’s familiar spices and the chillies.

Although growing up, Sashi’s only exposure to India was a “temple tour with family at the age of six,” he grew up eating Singapore-influenced Indian food, including his mother’s lamb biryani, made with traditional spices, as well as lemongrass and pandan leaves.

Working for Singapore Police’s STAR (Special Tactics and Rescue), he relocated to Australia with his family in 2011, where he worked with the Justice Department in Melbourne.

“I then moved to Adelaide when I was with the Department for Correctional Services, which is the prisons. I had been a police officer for almost 20 years by then and was almost 40, so I decided it was time to do something different,” he says.

“Then, the MasterChef Australia ad started popping up on my Facebook,” he laughs. He applied and was called for an audition. “That’s when I knew this was real. I had not watched the show, so my wife diligently made me watch two episodes everyday after I came home from work.”

A crowd favourite, Sashi ended up winning Season 10 of MasterChef Australia 2018, after which he started a popup kitchen in Melbourne. “While MasterChef is a good platform to show your talent, it doesn’t mean people will accept you in the kitchen. Chefs slog for years and years to get where they are,” he says, explaining how he worked hard to launch his first restaurant, Gaja, in Adelaide.

“I was a lucky winner. I got to travel and make the most of the exposure before the pandemic hit,” says Sashi. Noticing the enthusiasm from Indian audiences for MasterChef, he decided to explore India in December 2018, travelling to Delhi, Mumbai, Chennai and Goa. “Then we drove to Tiruchi and Madurai. And ended the trip in Kerala, where my wife’s family is from: Alleppey, Kochi and Thiruvananthapuram.”

Now, after many months of planning and research, he is ready to open Pandan Club in T Nagar. “The food will be fairly traditional, with some wok stations, grills and barbeques,” he says, adding, “We also have some cocktails, with lemongrass, pandan leaves and blue pea flowers.”

Contrary to most discreet restaurant launches, he seems happy giving all the details away. “I have no secrets,” he says with a loud laugh, “Chennai seems excited about this — so let’s all do it together.”

(Just make sure you have legit kitchen skills before you mail him your resume. )