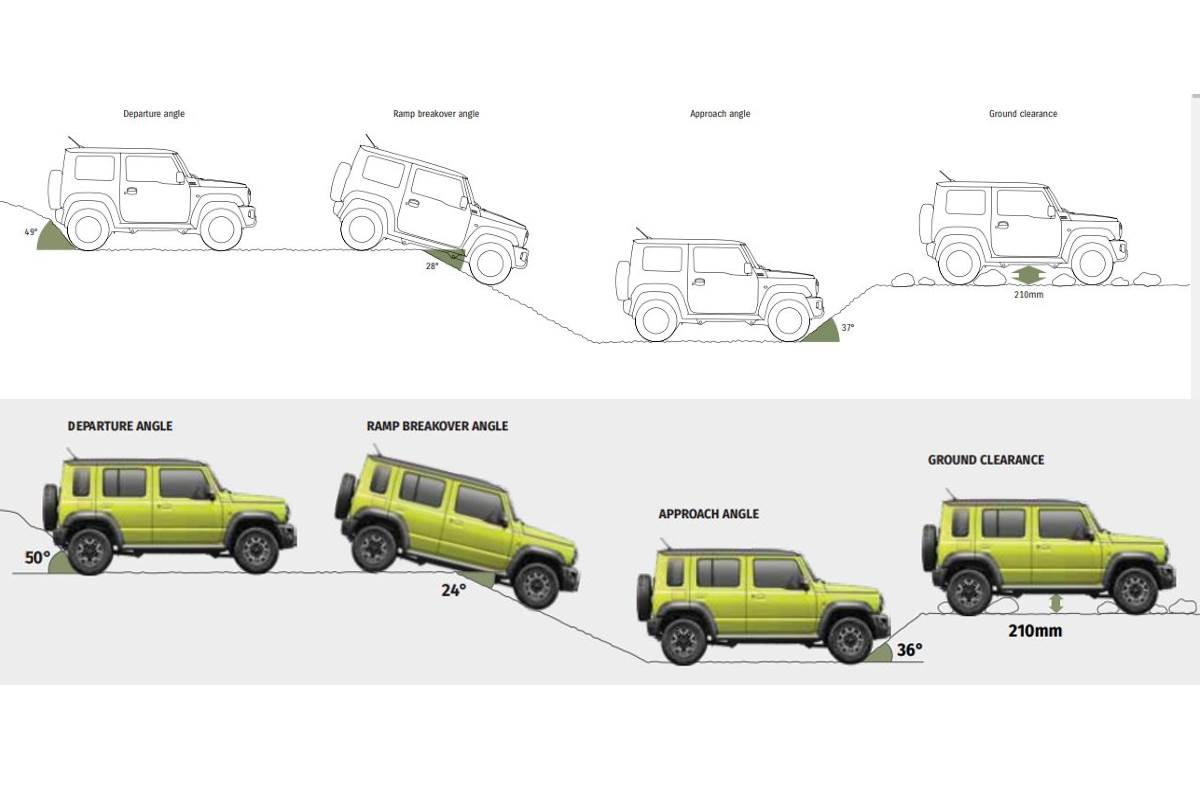 The 5-door Jimny’s departure, ramp breakover and approach angles are not too different from that of the 3-door model.

After years of waiting, Maruti Suzuki finally unveiled the 5-door Jimny at Auto Expo 2023. The additional doors and a longer wheelbase make the 5-door Jimny more practical than the 3-door model. However, the Jimny is an off-roader at its core, a USP that Maruti is not willing to let go of in favour of added practicality.

In an interview with Autocar India at Auto Expo 2023, CV Raman – CTO, Maruti Suzuki India – told us that the 5-door Jimny’s off-road capability is not compromised compared to the 3-door model. “When you go from 3-door to 5-door, you obviously need to increase the wheelbase. However, we have optimised it in a way that it doesn’t lose its off-road character”, he said.

How does a longer wheelbase affect off-road performance?

Consider, for example, an off-roader that is available in both short- and long-wheelbase versions and with the same ground clearance. The short-wheelbase version will generally be better off-road, thanks especially to the better breakover angle provided by the shorter wheelbase. A breakover angle is essentially the maximum angle you can drive over without the car’s bottom hitting the surface. The bigger the angle, the more capable your vehicle is over larger obstacles. As the wheelbase gets longer, the breakover angle reduces.

Coming to the Jimny SUV, despite the considerably large wheelbase difference of 340mm between the 5-door and 3-door versions, their ramp breakover, departure and approach angles differ only slightly, as can be seen in the table.

It is worth noting that the 5-door Jimny is heavier than the 3-door by almost 100kg. Typically, the lighter the car, the more nimble it is, and the less prone it is to getting stuck on slippery surfaces.

There’s hardly anything that differentiates the two when it comes to off-road gear. Both, the 3-door and 5-door Jimny SUVs get All-Grip Pro – the most advanced of Suzuki’s AllGrip tech. It comes with a low gear ratio that further multiplies engine torque and limits speed.

Both, the 5- and 3-door Jimny SUVs get tech that enhances their off-road abilities, like hill-hold assist, hill descent control and brake limited slip differential. Moreover, they also have the same ground clearance of 210mm.

The Jimny 5-door is expected to go on sale in May 2023 and is likely to be priced around Rs 12 lakh. The SUV will be sold through Maruti Suzuki’s Nexa chain and, at launch, will have no direct rivals.