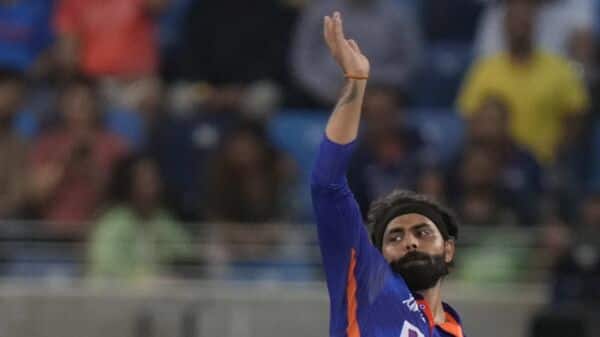 On August 28, India defeated Pakistan by five wickets in the Asia Cup 2022 match at the Dubai International Stadium. Former Indian batter Sanjay Manjrekar, a member of the broadcasting team, was tasked with interviewing Ravindra Jadeja shortly after the game.

Also Read: All praises for Team India from all corners

Jadeja contributed to India’s victory with a crucial 35 off just 29 balls. Manjrekar made the decision to lighten the tone in order to break the ice as everyone anticipated how the meeting would proceed. The first question Manjrekar posed to Jadeja was unrelated to the game; instead, he inquired as to whether Jadeja would be comfortable being interviewed by Manjrekar.

“Well, I’ve got Ravindra Jadeja here with me. First question ‘You’re ok to talk to me, right, Jaddu?’, to which the India all-rounder replied, ‘Yeah, absolutely. I don’t have any problem,’ with a smile.

Many are perplexed as to why Jadeja and Manjrekar exchanged words in this manner at the post-match ceremony. We must learn what transpired in England in 2019 in order to understand that.

Also Read: India vs Pakistan: Tickets sold out in 5 minutes; organisers had to do this

Jadeja was quite unimpressed with the comment and went on to launch a verbal attack on the former cricketer. “Still I have played twice the number of matches you have played and I am still playing. Learn to respect ppl who have achieved. I have heard enough of your verbal diarrhea,” he tweeted.

When Ravindra Jadeja was playing a crucial innings on August 28, there was a statistical presentation that showed that his performance improved significantly since 2019. In fact, Jadeja has been playing his best cricket ever since. Interestingly, it was Manjrekar who was at the commentary box when the graphic was shown. “Something happened in 2019,” Manjrekar commented.

Also Read: India vs Pakistan: Anand Mahindra asks tweeple if he should watch the game

Jadeja, during his conversation with Manjrekar, discussed his innings and the 52 runs he and Hardik Pandya scored together. The two met when India still needed 59 runs off 34 balls after losing Suryakumar Yadav.