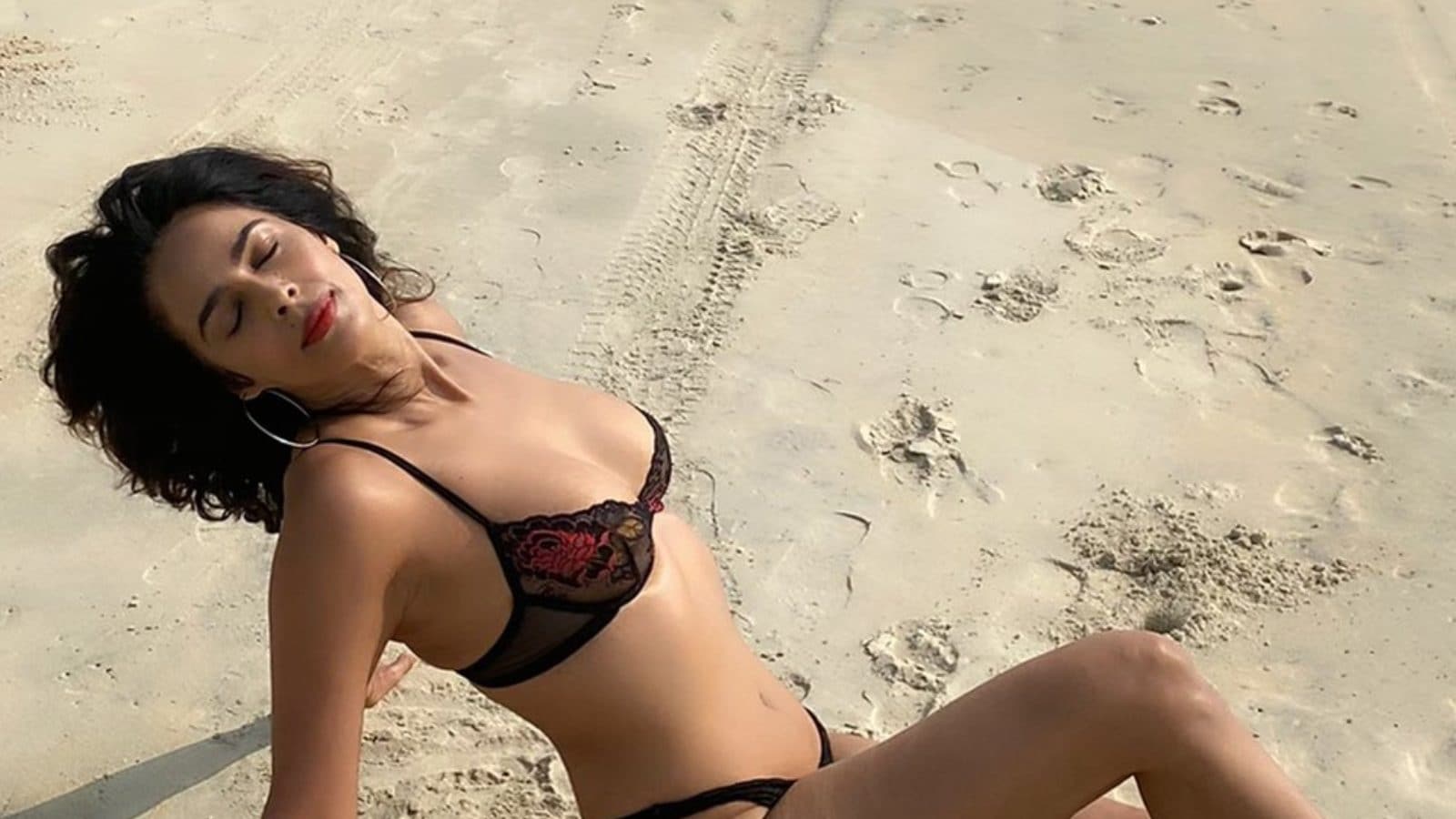 
Mallika Sherawat recently hit the headlines when she returned to the big screens with Rajat Kapoor’s Rk/RKay. The actress is undoubtedly one of the hottest celebs in the tinsel town of Bollywood. The Murder star who secured a place in everyone’s hearts with her roles in films like Murder, Welcome and Hisss, never fails to impress leave her fans stunned with her social media posts. Maintaining the trajectory, the actress took to Twitter and dropped a super hot pic, from her birthday.

The actress who celebrated her 46th birthday on Oct 24, shared a glimpse of how she has maintained her super-toned body. In the photo, Mallika looks super hot dressed in a skimpy black bikini, as she struck sensuous poses while resting on a beach. The actress kept her shiny strands open with a bold red lip, which complemented her stunning look. Taking to the captions, Mallika wrote, “Birthday Girl, Fit & Fabulous ✨ #birthdaygirl #yogabody #FitnessGirl #fitbody.”

Soon after the pic was shared, scores of her fans chimed into the comments section to shower compliments on the actress and send birthday wishes. One fan wrote, “Wish you a fabulous day. Happy birthday.” Another fan tweeted, “Happy birthday dear one of my favourites mallika Sherawat Ji Wishing to have Your Follow back today. ” Another comment read, “♥️ Absolutely fit and Fabulous‍♀️‍♀️.”

Meanwhile, in Mallika’s recent interview with News18 Showsha, the RK/RKay actress talked about the same how Bollywood is a much easier place for men in comparison to women. She also mentioned how men are directing roles for men in the industry. She went on to call Bollywood a patriarchal system and added that it is primarily because our country is also patriarchal.

“The industry is definitely a much easier place for male actors. Of course, they also have their struggles but if you want to compare between actresses and actors, for sure (it is easier for actors). To begin with, it is a very patriarchal system. The whole country is very patriarchal. So Bollywood is also a part of our country. The system is very patriarchal. Also, the kind of roles that are written, most of the directors are men. I am not complaining. I am just explaining how it makes it easier for men. Men are writing roles for men. So, men are getting all the great parts. Thankfully now with OTT, it is changing but it definitely is a much easier place for men,” Mallika Sherawat said.

On the work front, Mallika Sherawat was recently seen in RK/RKay along with Rajat Kapoor. The film was released in theatres on July 22. Even though it gained positive reviews from critics, the film failed to rule the box office. After RK/RKAY, Mallika will next be seen in an OTT show directed by Gurmmeet Singh titled Bouncer Nagar.