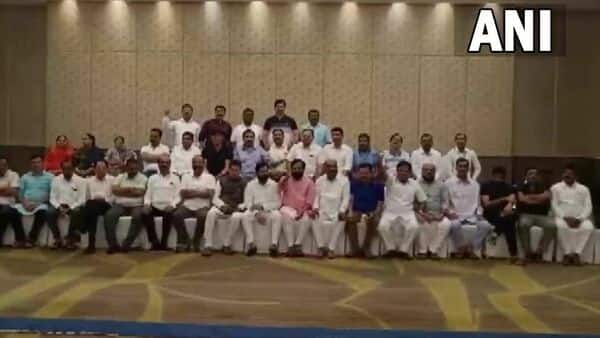 The 37 rebel Shiv Sena MLAs camping in Guwahati on Thursday collectively sent a letter to Maharashtra Assembly Deputy Speaker Narhari Zirwal, stating that Eknath Shinde will remain their group leader. While Maharashtra Minister Eknath Shinde exuded confidence in the victory of the Shinde camp saying that they will face everything with unity.

Additionally, Shinde said the MLAs who are in a Guwahati hotel will be victorious in the end. Shinde was elected leader at a meeting of rebel MLAs at the Guwahati hotel where they are staying. The meeting also unanimously decided to authorize Shinde to make a decision about the future course of action.

Meanwhile, Shiv Sena leader Eknath Shinde on Wednesday wrote to the Deputy Speaker of Maharashtra Assembly regarding the reaffirmation of his appointment as the leader of the Shiv Sena Legislature Party.

In the letter, Shinde also requested the appointment of Bharatshet Gogawale as the chief whip of the party. The letter has the signatures of 37 Shiv Sena MLAs and a copy of the letter has been sent to Deputy Speaker Narhari Zirwal, Governor Bhagat Singh Koshyari, and Secretary to the Legislative Council Rajendra Bhagwat.

Earlier in the day, the Shiv Sena faction led by Chief Minister Uddhav Thackeray filed a petition before the Deputy Speaker of the state assembly seeking the cancellation of membership of 12 rebel MLAs including Eknath Shinde for “not attending” legislative party meeting held on Wednesday.

The resolution, adopted on Tuesday by rebel MLAs, said that Shinde was unanimously elected as leader of the Shiv Sena Legislature Party in 2019 and continues to be the leader of the legislative party.

Shiv Sena MP Arvind Sawant told ANI that a notice had been issued before the meeting which said that if an MLA does not attend the meeting, legal action will be taken.

“We’ve filed a petition before the Deputy Speaker (of the Maharashtra Legislative Assembly) and demanded that the membership of 12 (MLAs) should be cancelled as they didn’t attend yesterday’s meeting,” Sawant said.

“Before the meeting notice was issued in which it was said that if you didn’t attend the meeting then legal action will be taken as per the constitution. Some didn’t come and some gave unnecessary reasons,” he added.

The petition has been filed by Ajay Choudhari, who was appointed “legislative party leader” after Shinde was “removed” from the post by the Shiv Sena.Shiv Sena’s Chief Whip, Sunil Prabhu had issued a letter to party MLAs, asking them to be present in the meeting.

The letter stated that if someone remains absent, it will be considered that the said MLA has decided to quit the party voluntarily. The letter also warned that if any MLA remains absent from the meeting without proper reason and prior information, they should keep in mind that action will be initiated to cancel their membership as per constitutional provisions.

The resolution, adopted on Tuesday by rebel MLAs, said that Shinde was unanimously elected as leader of the Shiv Sena Legislature Party in 2019 and continues to be the leader of the legislative party.

Amid the continuing turf war within Shiv Sena, the Shinde faction also said that Bharat Gogawale has been appointed as Chief Whip of the party. The three legislators who arrived in Guwahati on Thursday include Agriculture Minister Dada Bhuse, MLA Sanjay Rathore and MLC Ravindra Phatak.