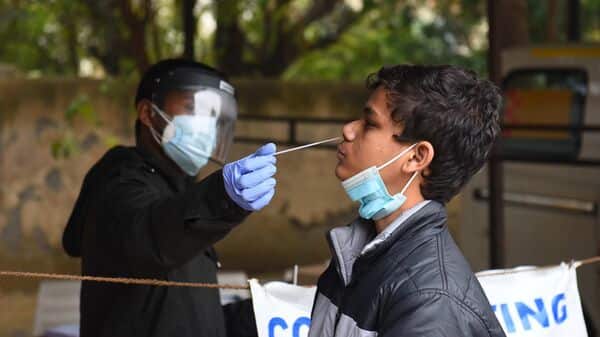 As many as 60 more people tested positive for Covid-19 across Karnataka in the last 24 hours, taking the cumulative tally to 39,46,934, said the state health department on Sunday.

No deaths due to the disease were reported in the same duration. The Covid fatalities in the state have stood at 40,057 for over a month now.

Of the total infections, the Bengaluru Urban district saw 57 while Chitradurga, Dharwad and Vijayapura reported one infection each. There were zero infections in 27 districts of the state.

Sixty-three people were discharged, taking the total number of recoveries to 39,05,159 to date.

In addition to this, a total of 7,208 people were administered vaccines on Sunday, taking the total vaccinated count to 10.57 crore.

This comes as Karnataka Chief Minister Basavaraj Bommai said earlier in the day that the state government will bring guidelines after the video conference of Prime Minister Narendra Modi with CMs regarding Covid-19 on 27 April.

Amid apprehensions of the fourth wave of the Covid-19 pandemic, Prime Minister Modi is set to hold a video conference with the Chief Ministers of the states on 27 April to discuss the precautions to tackle it, Bommai informed.

“The Union government has already issued a caution alert. A slight increase in cases has been recorded in Kerala and Maharashtra in the last 8-10 days. Based on the experience of the last three waves, experts too have suggested suitable precautionary measures. The health minister has already issued a few instructions. Clear instructions would be issued for Covid management in the State after the video conference with the prime minister,” said Bommai.

“It is important for people to be careful. Covid second wave started slowly and later exploded. The scientists are studying the virus variants,” he added,” he added.