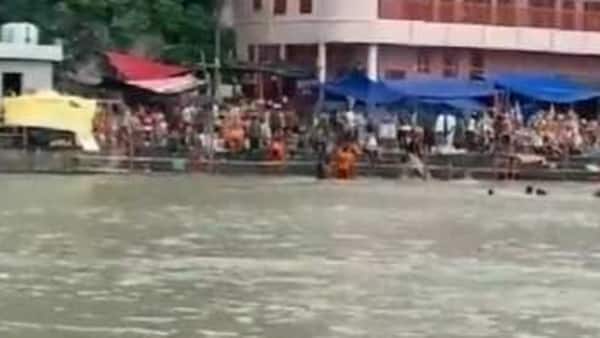 As many as seven Kanwar Yatra pilgrims were rescued in a joint operation by Indian Army and police officials after they were swept away by a powerful current of Ganga river in Uttarakhand’s Haridwar.

In a video footage shared by news agency ANI, the Kanwariyas were seen struggling to hold control in the river, however, they were later saved by the Army and police personnel.

Naresh Chaudhary, Zonal Magistrate urged the devotees to stay away from the strong current of Ganga river. He added that so far, the swimmers’ team of Indian Army has rescued 18 pilgrims from drowning since the beginning of Kanwar Yatra 2022.

“Yesterday also, a woman was washed away in a strong current who was later rescued. She was admitted to the hospital and is now completely safe,” Chaudhary said as quoted by ANI.

In addition to this, five more Kanwariyas were rescued from drowning while holy bathing in the Ganga river in Haridwar on Thursday, according to PTI reports.

The Indian Army deployed the jawans of 40th battalion of the Provincial Armed Constabulary (PAC) on the river banks, spotted the drowning pilgrims and dived into it immediately to save their lives.

Meanwhile, the District Magistrate of Uttarakhand’s Haridwar on 17 July declared holidays from July 20-26 in all the schools and Anganwadi centres of the district due to increasing number of pilgrims for Kanwar Yatra.

‘Kanwar Yatra’, an annual pilgrimage of Lord Shiva’s devotees, started on 14 July. ‘Sawan’ (Shravan), which is considered to be the most auspicious month of the year, started on July 14 this year. The devotees also observe fasts on Mondays which are called particularly auspicious days of the month.

During this, the Kanwariyas or pilgrims visit holy places like Haridwar, Gaumukh and Gangotri in Uttarakhand and Sultanganj in Bihar to fetch the holy water of river Ganga. They then worship Lord Shiva with the same water.

Generally, the devotees of Lord Shiva or ‘Kanwariyas’ collect water from river Ganga at Haridwar to offer at Shiva temples in their areas as part of the yatra.

The pilgrimage is taking place this year after the covid-associated restrictions of two years.