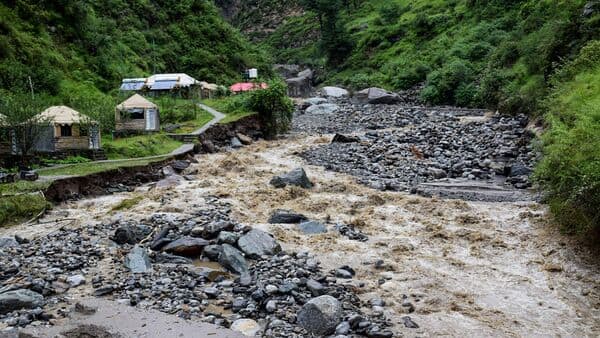 No casualties have been reported so far, although two vehicles were hit when the flyover caved.

The Kalka Shimla National Highway 5 flyover connects to a four-way tunnel which has been closed for traffic for now. Restoration is underway.

ANI tweeted the images of the damaged highway today where a huge part of the Shimla- Kalka highway flyover was seen with vehicles on the edge of the caved sinkhole.

Chief Minister Jai Ram Thakur, taking the cognisance of the matter stated, “There’s been massive rain in Himachal since last night. All deputy commissioners have been put on alert to report about the damages. There have been infrastructure losses in Kullu and Mandi areas.”

Heavy rains wreaked havoc in parts of Himachal Pradesh on Thursday with two people being buried alive under debris following a landslide in Kullu district, while shops and vehicles were washed away and highways blocked by flash floods in other places.

Sudesh Mokhta, director of the state disaster management department said, earlier on Thursday, in Kullu, Chavelu Devi (55) and Kritika (17) died when their house at Khadel in Anni subdivision was hit by debris following a landslide around 9 am.

In another incident in the district, 10 shops and three vehicles were washed away after a cloudburst hit the Deuthi gram panchayat in Anni tehsil around 7.30 am, he added.

The national highway to Kullu from Mandi was blocked, too, following a landslide near Pandoh in the morning. Traffic has been diverted through Kataula.