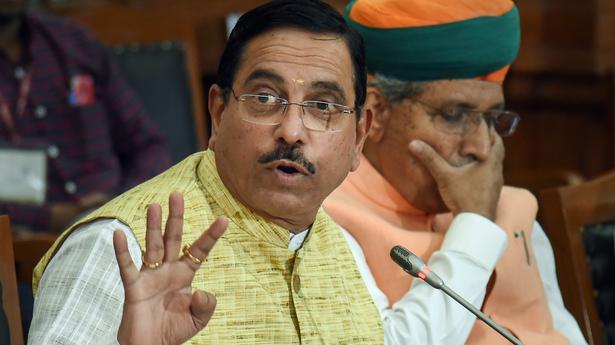 
Coal Minister Pralhad Joshi on Saturday said there was sufficient coal availability in the country as 72.50 million tonnes (MT) of dry fuel was available at different sources and 22 MT at thermal power plants.

The Minister asserted that available coal stocks would last for a month and availability was getting replenished on a daily basis with record production.

Mr. Joshi said that at present 72.50 MT of coal was available at different sources of Coal India Ltd. (CIL), Singareni Collieries Company Ltd. (SCCL), and coal washeries among others.

According to the government’s provisional data, the total coal production during FY21-22 was at 777.23 MT compared with 716 MT in FY21, recording a growth of 8.55%, the coal ministry said in a statement.

CIL accounts for more than 80% of domestic coal output.

Heat waves across several parts of India, the consequent increase in power demand, and fears of a coal shortage have triggered planned blackouts in many states in the country, including Maharashtra.

Union Minister Raosaheb Danve said there was enough coal for supply to power plants and alleged that the Maharashtra government was busy blaming the Centre instead of providing electricity to citizens.

Maharashtra Energy Minister Nitin Raut had earlier said that load shedding in the State was a result of increase in electricity demand relaxation of the COVID-19 curbs, and blamed the Centre for poor management of coal supply.