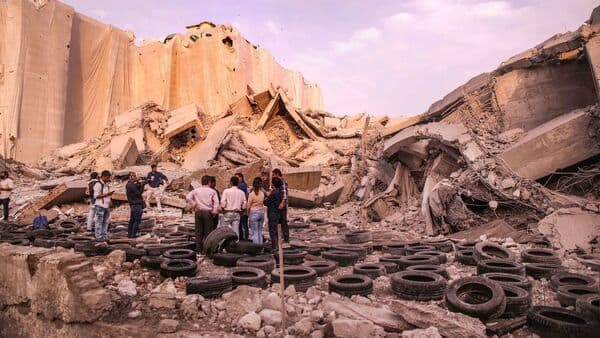 
Edifice Engineering, which is based in Mumbai selected the South African firm Jet Demolitions which is said to be the ‘foreign brain’ behind the successful razing of the structure in Noida.

“India has joined the club of countries that have razed buildings taller than 100 metres”, Joe Brinkman of South African firm Jet Demolitions said. The illegal twin towers in Noida’s Sector 93A were grounded by waterfall implosion technique in a matter of 12 seconds, Brinkman told reporters. “India and Edifice have now joined the 100-metre club of countries which have buildings over this height that have been demolished and that too with residential buildings standing so close to them, making the project extremely challenging,” Brinkman, 62, said, heaping praises on the Edifice-Jet team.

The two had together previously demolished four residential complexes in Maradu municipal area of Kochi, Kerala in a similar fashion.

Jet Demolitions holds a distinguished position globally for demolition works. In November 2019, the firm had grounded the 108-metre-tall Bank of Lisbon building in Johannesburg within a few seconds in an eye-popping event and ensured that a structure barely seven metres next to it was safe too.

Brinkman said the whole process for demolishing the Noida twin towers took 12 seconds. He said the team’s first priority was to ensure that there were no injuries to people during the implosion and no structural damages caused to any of the buildings around.

He added that very few buildings taller than 100 metres have been demolished in a controlled manner across the world.

Mehta said around 35,000 cubic metres or approximately 80,000 tonnes of debris was left after the demolition. Around 50,000 tonnes of it has been absorbed in the basements of the now-demolished towers while the remaining would be disposed of in 90 days, he said.

“We will have to coordinate with the Emerald Court and ATS Village societies for the disposal since the debris would have to be first processed at the site only and then it would be taken to construction and demolition waste processing centres. “Coordination would be needed for fixing the timing for work at the site to cause least disturbance to residents,” said Mehta.

Jigar Chheda, another Edifice partner, said they took a full six months to plan the clean execution of the demolition and the whole exercise was a “very challenging” process.

“Days and nights went into the preparation for this day. Over 9,000 holes were drilled for explosives in the two buildings; they had to be most accurate and all this was challenging,” Chheda told PTI. “Getting permission from all authorities concerned, coordinating with multiple agencies, and convincing residents of safety were key effort areas,” he said.

Mayur Mehta, project manager for Edifice, said 9,642 holes were drilled and 3,700 kgs of explosive were used for the demolition. “The types of explosives used were Solar coal – with 6 gm, 10 gm, 20 gm, and 80 gm mass. Electric detonators, shock tubes and emulsions were also used. The tubes were placed in a way that some had a 0.5-millisecond explosion capacity, while others had a 7,000-millisecond capacity,” he added.

Meanwhile, only seven people were present inside the exclusion zone to trigger the button that set off over 3,700 kg of explosives in a series of blasts separated by microseconds.

Those present inside the exclusion zone were Indian blaster Chetan Dutta, who pressed the button, Mayur Mehta, the project manager for Edifice Engineering, and IPS officer Rajesh S, who is also the local deputy commissioner of police.

Besides them, four members of Jet Demolitions — Joe Brinkkman, Marthinus Botha, Kevin Smit and Ian Ehlers — were present there.

The detonation team was stationed about 100 metres close to the 50-acre city park in front of the twin towers. The final evacuation clearance came around 12.30 pm and the demolition took place at 2.30 pm.

Edifice officials said nine metres of the boundary wall of ATS Village comprising some 900 bricks was damaged. Several window panes in Emerald Court as well as ATS Village were cracked and they had started the process to replace them with new ones shortly after inspection at the site Sunday evening.