India has safeguards in place to mitigate risks from capital flows: IMF 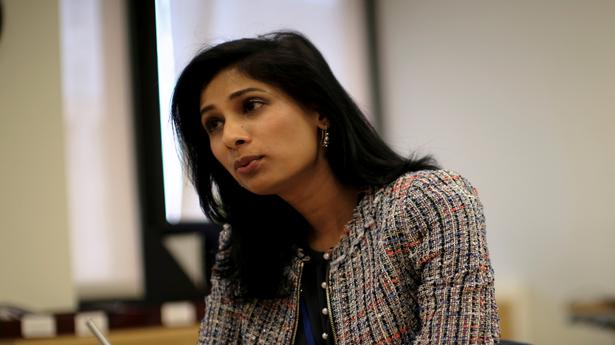 India, which has received a record number of foreign direct investment during the last few years despite COVID-19 crisis, has quite a few safeguards in place to mitigate the risks from capital flows, the International Monetary Fund said Wednesday.

“Capital flows have several benefits. They finance needed investments. They help insure against some kinds of risks. There are many benefits to countries from having capital flows in India and also benefits from receiving those capital flows,” IMF’s First Deputy Managing Director, Gita Gopinath, told reporters here.

The IMF on Wednesday released a paper on the Review of the Institutional View (IV) on the Liberalization and Management of Capital Flows. The IV was adopted in 2012 and provides the basis for consistent Fund advice on policies related to capital flows.

The IV aims to help countries reap the benefits of capital flows while managing the associated risks in a way that preserves macroeconomic and financial stability and does not generate significant negative outward spillovers. The Review introduces important changes that expand the toolkit for policymakers, such as allowing the pre-emptive use of capital flow measures on inflows if financial vulnerabilities exist.

In response to a question, Ms. Gopinath noted that there are other kinds of financial risks associated with having large amounts of capital inflows.

“In the case of India, there are a large number of capital restrictions already in place. The Indian government uses these restrictions quite proactively in dealing when the external environment changes. So, by putting restrictions on the amount of external borrowing the corporates can do, that is an instrument that they use. And they use it in response to changing external circumstances.”

The top IMF official said, capital flows are desirable because they can bring substantial benefits to recipient countries. But they can also result in macro-economic challenges and financial stability risks, she said.

“The dramatic capital outflows we witnessed at the start of the global pandemic, and the recent turbulence and capital flows to some emerging markets following the war in Ukraine are stark reminders of how volatile capital flows can be and the impact this can have on economies,” Ms. Gopinath said.

In the aftermath of the great financial crisis, where interest rates were low for a long time in advanced economies, capital flow to emerging markets in search of high returns, she said. In some countries, this led to a gradual buildup of their external debt in foreign currency, which was not offset by foreign currency assets or hedges, she noted.

“Then when the taper tantrum struck and there was a sudden loss of appetite for emerging market debt, it led to severe financial distress in some markets. Now the lessons learned from such episodes and from a large body of research is that in some circumstances, countries should have the option of preemptively curbing debt inflows to safeguard macro-economic and financial stability,” Ms. Gopinath said.

Accordingly, the main update to the policy toolkit released by the IMF is the addition of capital flow management measures and macro prudential policies that can be applied preemptively.

“But when used appropriately, these measures reduce the likelihood of a financial crisis in the event of a sudden reversal of capital inputs. This change builds on the integrated policy framework, a research effort by the IMF to build a systematic framework to analyze policy options and tradeoffs in response to shocks given country specific characteristics,” she said.

The latest IMF report, she said, highlights the risks to financial stability that can arise from a gradual buildup of external debt liabilities, especially when these generate currency mismatches, and narrow and exceptional cases from foreign debt denominated in local currency.

“Preemptive capital flow management measures and macro prudential policy to restrict inflows can mitigate risks from external debt. Yet they should not be used in a manner that leads to excessive distortions, nor should they substitute for necessary macro-economic and structural policies or views to keep currencies excessively weak,” Ms. Gopinath said.

“Another update to our advice is to give special treatment to some categories of capital flow measures governed by certain other international frameworks for security considerations. It also provides practical guidance for policy advice related to capital flow measures including how to identify capital inflow surges and how to decide whether it is premature to liberalize capital flows,” she added.