India and US bridge Ukraine differences 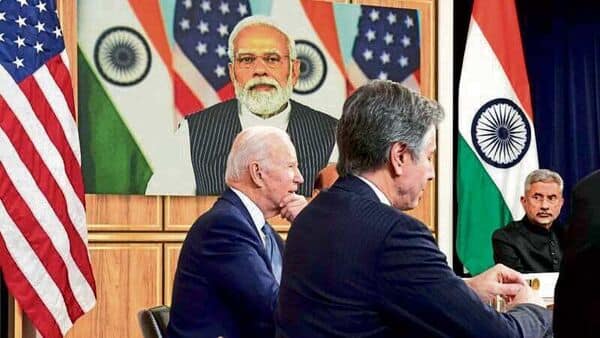 Bridging their differences on Ukraine, India and the US recommitted to their bilateral strategic partnership, articulated their shared interest in securing a free and open Indo-Pacific and hailed Quad “as a force for global good”.

The two countries meeting as part of the 2+2 ministerial dialogue also signed a memorandum of understanding on ‘space situational awareness’ and will conduct a dialogue on space and artificial intelligence this year.

India has become an associate member of the combined maritime forces task force in Bahrain, and the US has acknowledged India’s focus on developing its domestic capabilities and promised to explore co-production and co-development.

With the Russian invasion of Ukraine emerging as a key point of discord in recent weeks, a joint statement issued at the end of the ministerial dialogue found a way to bridge the differences between the two sides. It said the ministers reviewed mutual efforts to respond to the humanitarian crisis in the country and assessed its broader implications. “They urged an immediate cessation of hostilities. The ministerial unequivocally condemned civilian deaths. They underscored that the contemporary global order has been built on the UN Charter, respect for international law, and the sovereignty and territorial integrity of all states.” India has articulated these principles in its approach to the crisis in the past, but it is the first time they find space in a joint India-US statement.

Blinken said the US would continue to increase its support to Ukraine and called on other nations to do the same and condemn Moscow’s increasingly brutal actions. “In our judgment, it is important that all countries, especially those with leverage, press Putin to end the war. And it’s also important that democracies stand together and speak with one voice.”

The secretary of state noted that India made “very strong statements” at the UN, condemning civilian killings, calling for an independent investigation and providing significant humanitarian assistance to Ukraine. Blinken placed India’s engagement with Russia in a historical perspective, acknowledging the US’s reluctance to be a close defence partner in the past.

“India’s relationship with Russia has developed over decades at a time when the US was not able to be a partner to India. Times have changed. Today, we are able and willing to be a partner of choice with India across virtually every realm – commerce, technology, education, and security. And that was very much the nature of the conversation we had today,” the secretary of state said.