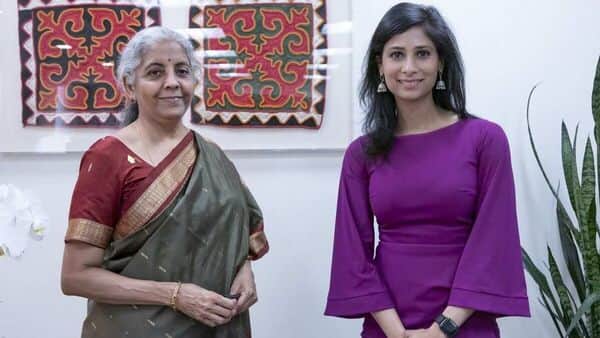 Sharing a photo with Sitharaman on Twitter, she also expressed, ‘happy to reconnect’.

These are challenging times for the membership, and I was happy to reconnect with Finance Minister of India @nsitharaman. We discussed the important role India can play to forge solutions on #debt, climate, and IMF quota review pic.twitter.com/wAf4XpvnlJ

Sitharaman visited the US earlier this week to attend several events including Spring meeting of the International Monetary Fund (IMF) and World Bank, the Central Bank Governor Meeting (FMCBG) and the G20 Finance Ministers meeting.

On meeting Gopinath, the two discussed India’s upcoming presidency in G20. India will hold the Presidency of the intergovernmental forum of the European Union and 19 other countries between December 1, 2022, and November 30, 2023.

IMF has recently slashed India’s projected growth rate to 8.2 after estimating it to be 9 per cent earlier this year, citing the impact of high oil prices on consumer demand and private investments.

On the sidelines of the event, the IMF chief also met UK Chancellor Rishi Sunak. The two discussed the economic outlook and risks to globalization. “Thanks to the UK for their many contributions to the IMF,” she said on Twitter.