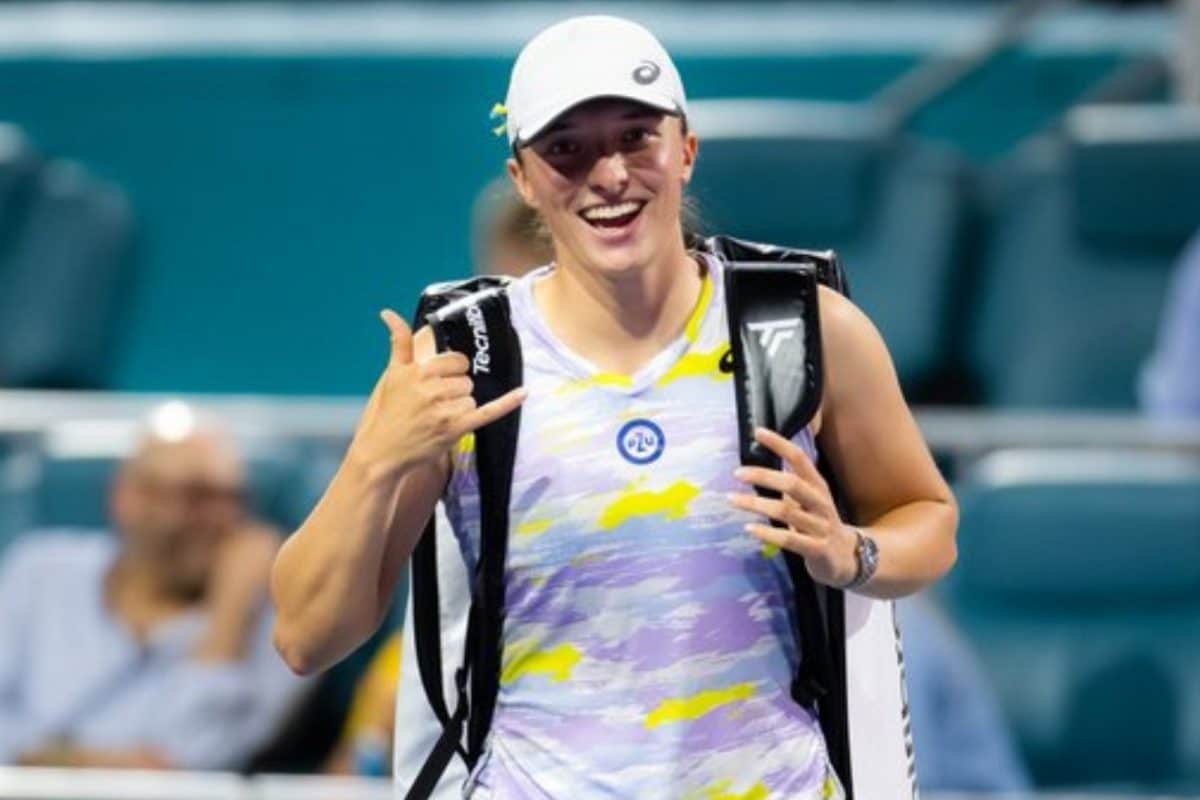 Iga Swiatek’s dream season continued as she defeated Petra Kvitova 6-3, 6-3 in the Miami Open quarter-finals to close in on a third successive WTA 1000 crown.

The new world number one won the title in Doha and then Indian Wells and now has an excellent chance of becoming only the fourth woman in history to win the Sunshine Double  — triumphing in California and Florida in the same year — following Steffi Graf (1994 and 1996), Kim Clijsters (2005) and Victoria Azarenka (2016).

Swiatek, who has now won 15 successive WTA tour matches, is the form player in the women’s game at the moment and American Jessica Pegula, who reached the last four earlier in the day after fifth seed Paula Badosa was forced to retire because of illness midway through the first set, will have her work cut out attempting to stop the Polish 20-year-old when they meet on Thursday for a place in the final.

Czech star Kvitova was on the backfoot once she was broken in the first set as Swiatek’s excellent hitting, especially from the back of the court, and her serve ultimately proved the difference.

The two-time Wimbledon champion fought hard, but Swiatek was able to maintain her aggressive, attacking game and when she broke for 3-2 in the second set it was always going to be an uphill battle for the 32-year-old now ranked 32nd in the world.

“I want to use the confidence I have had since the start of the year and I am on a roll,” Swiatek said after winning in one hour and 14 minutes at Hard Rock Stadium.

“I am just so happy I can compete against legends like Petra. I knew I had to keep up with the pace as she plays fast and I think my first serve was the key.”

Pegula goes into her second WTA 1000 semi-final well rested after her round of 16 match against Anhelina Kalinina only lasted a set before the Ukrainian retired.

The same fate then befell Spain’s fifth-seeded Badosa in the quarters on Wednesday, as she conceded the contest with the score at 4-1 to the American.

“I think that’s helped, I don’t want to say get a retirement, but sometimes you just never know how someone is going to react when they get out there, even though you know they are not feeling well.

“I think from Paula’s last match I could tell that she probably wasn’t going to be 100% by today, but again, I have no idea what happened or how she was feeling or if she recovered or if it was quick.

“It’s just hard to know in those situations. It can be kind of awkward. I am just trying to focus on myself and play the best tennis I could, and I’ve been able to do that.”