Hubble Telescope, even though it is over 30 years old, is packed with technology that keeps enriching our knowledge about the Universe we live in. Now, its data has revealed that there is water vapor on Jupiter's moon Ganymede. 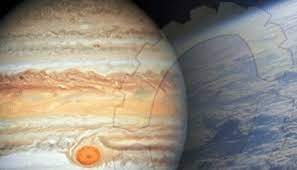 Hubble Telescope is a technological marvel and time and again it has proved itself invaluable in revealing facts about the planets and the universe as a whole that add enormously to the wealth of knowledge for humanity. Now, for the first time ever, water has been detected on Jupiter’s moon, Ganymede by Hubble.

It was suspected for long, but now, the Hubble telescope seems to have pinpointed that fact. In fact, Hubble has found strong evidence of water vapor on Ganymede. It is being argued that the water vapor has come from ice on Ganymede, which turned to gas (vapor) in a process known as sublimation – ice never manages to turn into a liquid form there due to the extreme cold.

Temperatures on Ganymede are extremely low, anywhere between minus 113 degrees Celsius to minus 183 degrees Celsius. The process of sublimation happens sometime during the day when the temperature rises enough to release some water molecules. The findings have been published in Nature Astronomy.

Researchers used some new data collected by Hubble alongside the old, to come to this conclusion. However, water has long been suspected to be on Ganymede in one form or the other.

In fact, some have even claimed that there is more water on Ganymede than there is in Earth’s oceans. However, now, with Hubble’s help, it is turning out to be more than just a theory and that there may be some fact in it too.

Ganymede is special in more than one way. Not just presence of ice/water vapor, the other factors that keep the spotlight on it is that it is the largest moon in our solar system. It is also the 9th-largest object there.

As if that was not enough, it is also the only moon with its own magnetic field, which cause auroras – these are ribbons of glowing, electrified gas.

Although the water or ice is surmised to be as far as 160 km below the crust, what makes scientists really excited about it is the old saying – where there is water, there is life. And if there is water, then it can be potentially habitable for humans some time in the future.

Production linked-incentive: How this new scheme will boost EV Industry?

Here’s all you need to know about the Sputnik Light COVID vaccine.

IMD Weather Forecast: Intense spell of rainfall is likely over these States.

Ola Electric has announced that the company has sold Ola S1 scooters worth more than ₹600 crore.

Realme to introduce a new budget smartphone in India.