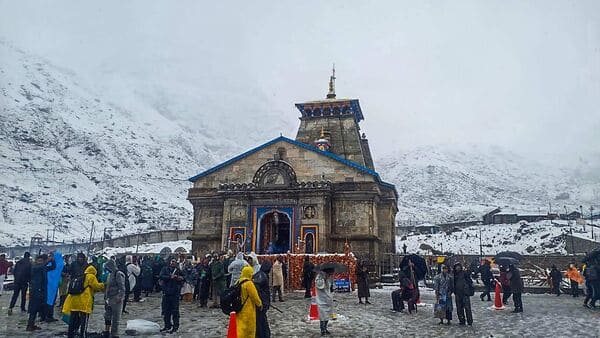 Harsh Goenka, the chairman of RPG Group on 3 July took to Twitter and shared a beautiful video of the snow clad mountains during his helicopter flight to Kedarnath.

The Char Dham Yatra which is a pilgrimage tour to four Hindu shrines: Yamunotri, Gangotri, Kedarnath and Badrinath.

In the video, the CEO showed the snow covered mountains and houses.

After being a low-key affair for the last two years owing to COVID-19 restrictions, this year more than 10 lakh pilgrims registered for the Yatra.

Meanwhile, following a hard landing of a helicopter ferrying pilgrims to the high-altitude Kedarnath shrine has prompted the aviation regulator to issue an advisory to all chopper operators plying on the Char Dham pilgrimage routes. An advisory was issued for the pilots and have asked them to exercise caution with regard to tail winds during approaches at the four high-altitude shrines, especially at Kedarnath which faces a constraint of a one-way approach.

“Adequate precautions are to be taken and if the tail / cross wind component is beyond the permissible limits, the approach is to be abandoned and helicopter is to return to base. With an increase in ambient temperatures and humidity, the power available decreases and consequently the load carrying capability reduces. This fact is to be kept in mind and, if required, the load shall be recalculated and reduced,” the advisory read.

Additionally, the ban which was imposed on the entry of pilgrims into the sanctum sanctorum of the Kedarnath temple has been lifted following a dip in the number of pilgrims visiting the Himalayan shrine.

The ban was imposed for safety reasons on May 6 considering the unprecedented rush of pilgrims, Badrinath-Kedarnath temple committee chairman Ajendra Ajay had said.

“The sanctum sanctorum of the temple has very limited space and allowing pilgrims inside it could be risky. So, the ban had been imposed which meant pilgrims could not go beyond the sabha mandap. But the restriction was lifted on Friday,” he said.

The relaxation has been given as there has been a sharp fall in the number of pilgrims visiting the temple daily.

“A dip in pilgrim footfall is recorded every year after June 20 because there are disruptions along the yatra routes during monsoon,” he said.

“The end of summer vacations in schools and colleges around this time of the year is another reason for the declining numbers. However, the influx of pilgrims picks up again during September-October when the weather clears,” he said.

According to official figures, till June 26, 203 pilgrims who were on Chardham Yatra had lost their lives.

Of these, 97 people, the maximum, died in Kedarnath. Fifty-one people died in Badrinath, 42 in Yamunotri, and 13 in Gangotri.