WhatsApp New Feature: WABetaInfo reports that WhatsApp is developing an official feature to help transfer chats from iPhone to Android phone quickly. Here’s everything we know about the feature so far. 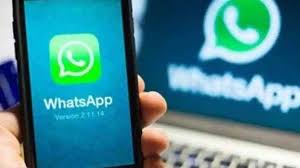 WhatsApp has launched several new features in the last few months. The instant messaging platform is reportedly working on a another feature, for which we all have been waiting for.

As per a report coming from WABetaInfo, a blog that keeps track of upcoming WhatsApp features and developments, the platform is developing an official feature to help transfer chats from iPhone to Android phone.

Since the introduction of WhatsApp, this has been one of the biggest problems that users have faced. It is good to see that the messaging platform is finally working to resolve the issue with the upcoming feature.

The latest report suggests that the instant messaging platform has been working on the chats transfer feature since April this year. The feature reportedly has been showing in WhatsApp’s software since a few months now.

WABetaInfo has also shared a screenshot showing how the feature will work once released. The screenshots show that it will be called “Move chats to Android”. The option will be added separately to WhatsApp’s iOS app.

The Facebook owned messaging platform has not revealed any details about the iOS to Android chat transfer feature yet. Since the feature is under development, we can expect it to first release for iOS beta users and then followed by stable build.

The timeline of the release is still unknown, so let’s wait for the platform to provide official details.

While the latest report shows chat transfer feature between iOS and Android, previous reports revealed vis-à-vis. Some past reports highlighted that WhatsApp will bring a Android to iOS chat transfer feature as well. No concrete details have been revealed by the Facebook owned instant messaging platform on these features yet.

WhatsApp and Facebook head recently announced to release multi-device support for both Android and iOS users out there. The feature is being currently being tested with beta users and allows to login to any device without the need for the primary phone.

As the name suggests, this feature will let users use their WhatsApp account in more than one device at a time. This will mainly help users who are working from home and using WhatsApp on their mobile phone as well as laptop or tablet at the same time. Currently, the platform allows to use an account only on one mobile device and a laptop/PC/tablet at the same time.

The Realme Pad is set to go on sale starting today.

All users will now be able to remove passwords from their Microsoft accounts.

OnePlus 9RT: The upcoming phone is likely to launch by the middle of next month.

Realme to introduce a new budget smartphone in India.

Xiaomi is all set to launch a batch of products on September 15th.

Taxpayers who file their returns on their own should be aware how incomes from other sources have to be reported.

RBI warns of KYC fraud. Here’s what you should do.