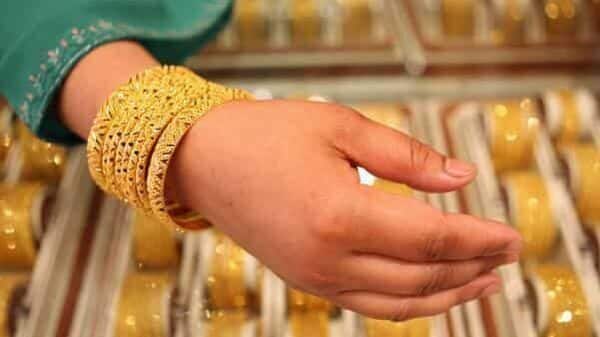 Gold price today: After giving breakout at $1935 per ounce levels in spot market last week, gold price fail to hold this advantage. After hitting around $1852 levels, yellow metal price has come below $1800 levels once again. On Friday, precious bullion metal closed around $1791 per ounce levels in international market whereas MCX gold rate for February future contract ended at 47,678 per 10 gm, ₹232 or around 0.50 per cent lower from its Thursday close.

According to commodity market experts, slide in gold price last week was mainly due to the US Fed’s hawkish stance on interest rate hike. However, they maintained that crashing equity market, dollar index in overbought condition, depreciation in Indian National Rupee (INR) against the US dollar (USD) and expected rise in crude oil price due to Russia-Ukraine conflict are some of the major triggers that may fuel gold price rally in near term.

Speaking on the international triggers that may support gold price rally in near term; Anuj Gupta, Vice President — Commodity & Currency Trade at IIFL Securities said, “Gold prices have recently corrected strongly after the Fed’s hawkish stance on interest rate hike. However, global inflation still remains a major concern as current Russia Ukraine conflict may fuel crude oil prices in the international market again and if this conflict last a little longer, Brent Crude oil prices may go up to $120 per barrel levels, which may further worsen the global inflation scenario leading to rise in gold price.”

Echoing with Anuj Gupta’s views; Amit Sajeja, Vice President — Commodity Research at Motilal Oswal said, “Global inflation will persist even when the Russia-Ukraine conflict ends sooner than expected. Average inflation in the US is expected to remain around 4.5 per cent to 5 per cent, which is much higher than the target figure of 2 per cent. Dollar Index has also appreciated to an overbought condition and it may tumble anytime leading to rise in gold price in spot market.”

INR vs USD: How fall in rupee may impact gold price

Speaking on the domestic trigger than may fuel MCX gold rates, Amit Sajeja of Motilal Oswal said, “Rupee has been depreciating against the US dollar for last one fortnight. It has come down from 74 levels to ₹75.3 per US dollar levels and it is expected to further go down up to 76 levels. So, MCX gold prices are expected to shot up due to slide in Indian rupee against the US dollar as well. So, one can expect MCX gold rate to go northward even when the spot gold price remains steady.”

On how fall in rupee impacts gold price in domestic market, Anuj Gupta of IIFL Securities said, “Re 1 fall against the US dollar leads to rise in domestic gold price by around ₹250 to ₹300 per 10 gm. In last one fortnight, we have witnessed around ₹1.3 slide against the US dollar as it has come down from 74 to around 75.3 levels. So, around ₹500 per 10 gm gold price rally has been contained by the recent Fed’s hawkish stance on key rates but further slide in INR against USD may spark fresh gold price rally of near ₹500 per 10 gm in the domestic market.”

Advising buy on dips strategy for gold investors in domestic market, Anuj Gupta said, “MCX gold rate has strong support at 47,100 levels. So, gold investors can buy gold in ₹47,500 to ₹47,600 range at MCX for immediate target of ₹47,900 per 10 gm levels. However, one can hold MCX gold February future contract for short term target of ₹48,300 maintaining stop loss at ₹47,100 levels.” Anuj Gupta of IIFL Securities went on to add that MCX gold price may go up to ₹48,500 and ₹48,700 immediately after breaching ₹48,300 hurdle.

Disclaimer: The views and recommendations made above are those of individual analysts or broking companies, and not of Mint.