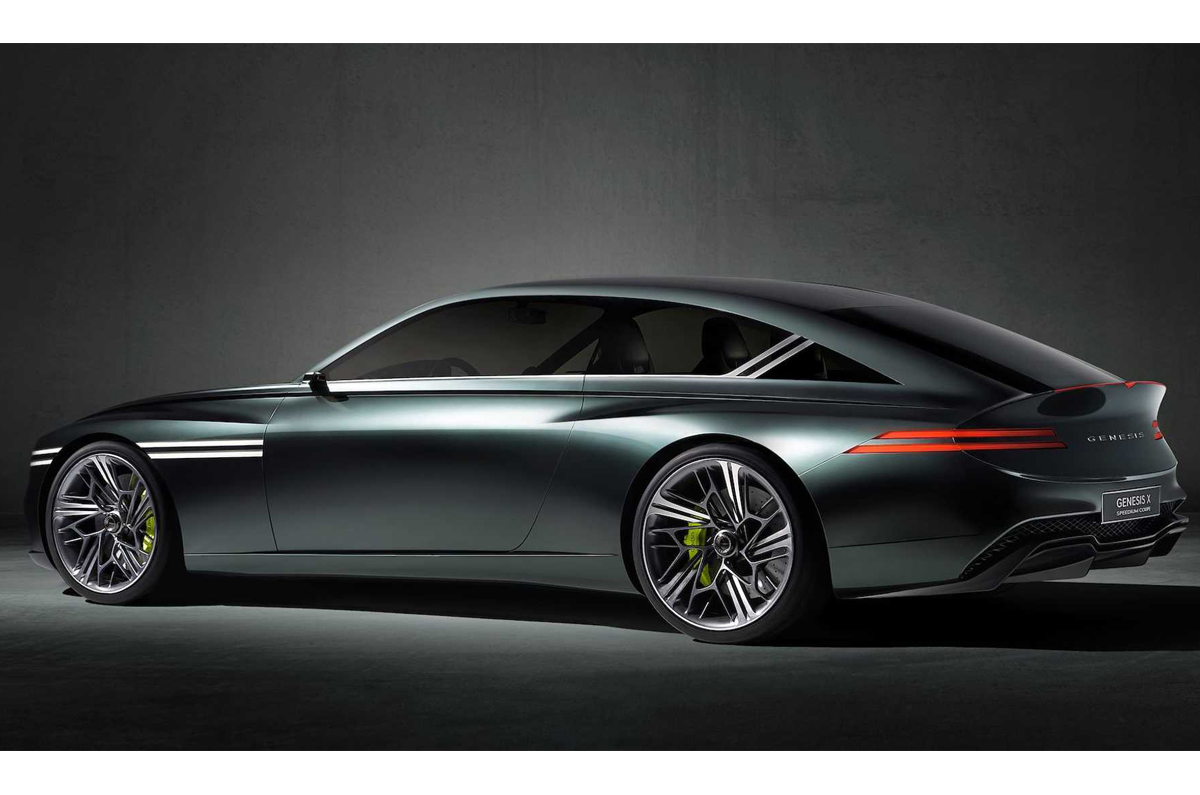 The Genesis Speedium concept is an evolution of the Genesis X concept from last year.

Hyundai’s luxury division, Genesis, has taken the wraps off its new Speedium Coupe concept, which is an evolution of the Genesis X Coupe concept that the carmaker had showcased around the same time last year. The Speedium concept, like the original X concept, may not preview any future production model, but it does showcase the design language that could be seen on future Genesis EVs.

Genesis Speedium Coupe Concept: what is it?

The Speedium Coupe concept has been designed by a team led by Luc Donckerwolke, the chief creative officer at Genesis. Based on the Genesis X concept, the company’s “two lines” design philosophy has been carried forward here as well, but it features a reworked roofline, updated lighting elements and – typical to EVs – a blanked-off grille. The original X concept had a mesh grille even though it was conceptualised as an EV.

The ”two lines” design theme can be seen on the headlamps, tail-lamps and the window line garnish. And while Genesis is calling it a coupe, it looks more like a two-door shooting brake, particularly when viewed from the rear quarter.

Compared to the X concept, the Speedium gets a larger glasshouse that extends further back, with the roofline gradually sloping down to end in a ducktail-style rear spoiler. The new blanked-off grille is surrounded by light bars arranged in an inverted triangular shape, which mimick the Genesis shield on the logo, and the bumper below features wider mesh intakes. Overall, the design is characterised by deep creases and pronounced bulges.

As for the Speedium name, it comes from a racetrack in Korea in the city of Inje, which the company believes will portray that driver engagement still holds emotional value in this era of electrification. However, the Speedium being only being a freestyle design exercise, it does not have a specific powertrain to talk about.

Genesis looking at SUVs for India

We had reported back in 2019 that Genesis was looking to enter the Indian market, with the first model set to be an SUV. The brand currently has two SUVs on sale in global markets – the GV80 and the Hyundai Tucson-based GV70 – though it’s not yet known which could be the first to arrive.

There is no word yet on the company’s plans to bring its sedan line-up to India, though the Genesis G80 sedan was previosuly spied testing on our roads, and could be on the cards at a later stage.

Would you like to see a production version of the Genesis Speedium concept? Let us know in the comments below.

Hyundai’s Genesis brand to launch only EVs from 2025