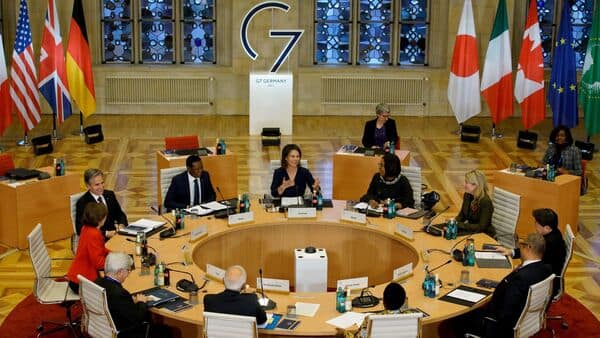 The Group of Seven Countries (G7) has agreed to establish a coordination mechanism to help war-hit Ukraine with critical energy and water infrastructure amid Russian attacks on the power grid that have caused widespread blackouts, according to the news agency ANI.

Germany held a two-day meeting in the western German town of Muenster to discuss Russia’s Feb 24 invasion of Ukraine, Iran’s deepening military alignment with Moscow over the war as well as China’s growing assertiveness, as per ANI reports.

The G7 members, while discussing Ukraine, called on Russia “to immediately stop its war of aggression against Ukraine and withdraw all of its forces and military equipment.”

During the meeting, GD foreign ministers condemned Russia’s recent escalation, including its attack against civilians and civilian infrastructure, in particular energy and water facilities, across Ukraine using missiles and Iranian drones and trainers. They said that Russia is trying to terrorize the civilian population through these attacks on Ukraine.

In the past few weeks, Russia launched waves of missile and drone strikes targeting Ukraine’s energy infrastructure. Kyiv says they have damaged up to 40 per cent of the power system and Ukrainian authorities warned that residents may face hours of blackouts due to the limited supplies, ANI reported.

Meanwhile, Ukraine and its Western allies have accused Iran of sending “kamikaze” drones, or unmanned aerial vehicles (UAVs), to Russia which have then been used to devastating effect by Russian forces in strikes targeting Ukrainian infrastructure.

“We strongly condemn Iran’s continued destabilizing activities in and around the Middle East. These include Iran’s activities with both ballistic and cruise missiles, as well as unmanned aerial vehicles (UAVs), i.e. drones, and transfers of such advanced weaponry to state and non-state actors. Such proliferation is destabilizing for the region and escalates already high tensions,” it added.

The G7 members also reaffirmed the importance of peace and stability across the Taiwan Strait and called for the peaceful resolution of cross-Strait issues.

Further, they raised their concern over human rights violations and abuses in Xinjiang and Tibet, as well as, over the continued erosion of Hong Kong’s rights, freedoms and autonomy.