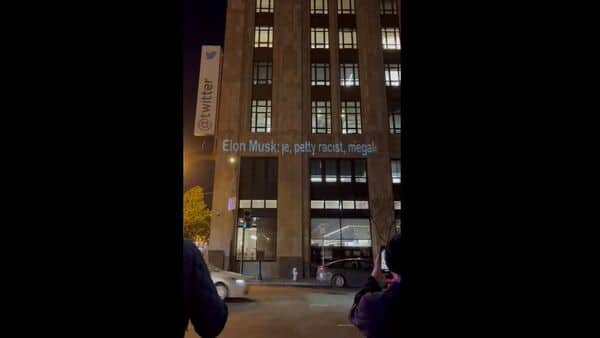 The rage among Twitter employees against their new boss-Elon Musk does not seem to die out soon. After trending “#RIPTwitter”, “GoodByeTwitter”, and “TwitterDown” on the platform itself, the staff has now reportedly bizarrely trolled the billionaire.

Videos of Twitter Headquarters in San Francisco have gone viral in which foul language has been used against Elon Musk.

However, it is unclear who has brutally dissed Musk–activists, or the employees.

Meanwhile, a message projected on the side of Twitter headquarters tonight reads:

Meanwhile, hundreds of Twitter employees are estimated to have decided to quit the beleaguered social media company following a new deadline from Musk that staffers sign up for “long hours at high intensity,” or leave.

The departures highlight the reluctance of some of Twitter’s 3,000 or so employees to remain at a company where Musk earlier fired half of the workforce including top management, and is ruthlessly changing the culture to emphasize long hours and an intense pace.

Over 110 Twitter employees across at least four continents had announced their decision to leave in public Twitter posts reviewed by Reuters.

About 15 employees, many in ad sales, posted their intention to stay at the company.

Twitter inc also notified employees that it will close its offices and cut badge access until Monday (21 November).

With reports filling in about the exodus, Elon Musk says that he is ‘not worried’ about it. The Twitter CEO has reacted to the mass exodus news in a series of tweets.

With #RIPTwitter trending on the microblogging site, Musk shared an image depicting the situational irony wherein the hashtag #RIPTwitter is amongst the top trending hashtags on the platform.

Further, he wrote, “the best people are staying, so I’m not super worried”. “And … we just hit another all-time high in Twitter usage lol”, reads another tweet by Musk.

The best people are staying, so I’m not super worried

A poll on the workplace app Blind on Thursday, which verifies employees through their work email addresses and allows them to share information anonymously, had showed 42% of 180 respondents opting for “Taking exit option, I’m free!”

A quarter said they had chosen to stay “reluctantly,” and only 7% of the poll participants said they “clicked yes to stay, I’m hardcore.”