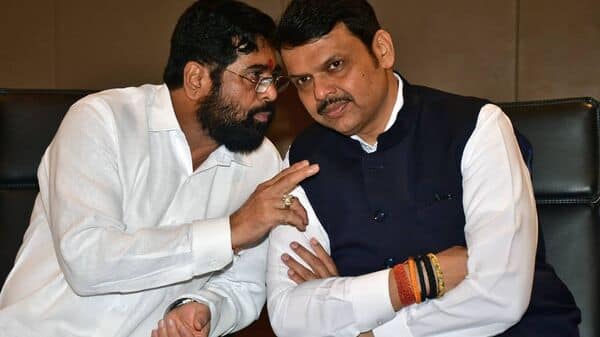 The Shiv Sena-BJP government, which has only been in office for four days, will be put to floor test today during a special two-day session of the Legislative Assembly.

Ahead of the floor test, Maharashtra Chief Minister Eknath Shinde along with his faction of Shiv Sena MLAs held a meeting with Deputy CM Devendra Fadnavis, BJP MLAs, and other party leaders at a hotel in Mumbai.

“The Shiv Sena-BJP alliance government is set to face a majority test on Monday, the second day of the special session of the legislature. What exactly will be the strategy of the government was discussed in the meeting held in the presence of all the MLAs today,” sources had said.

Meanwhile, the new coalition elected BJP candidate Rahul Narwekar was elected as the Speaker of the House with 164 votes in support and 107 against him on the first day of the special two-day session of the Legislative Assembly that began on 3 July. He defeated Shiv Sena candidate Rajan Salvi.

Eknath Shinde, who has been claiming the support of 40 rebel Shiv Sena legislators said that he expects the government to be successful in the floor test to be held tomorrow like the Speaker’s election held today, sources added.

Fadnavis claimed that the Shinde government will prove its majority with 166 votes.

“The youngest speaker candidate won the speaker election with 164 votes today as 2 MLAs couldn’t come due to health issues. We would prove our majority with 166 votes in the vote of confidence,” he said.

At present, the BJP has 106 MLAs in the 288-member Maharashtra Assembly and Shinde is leading 39 rebel Shiv Sena legislators and some Independents. After the death of a Shiv Sena MLA recently, the current strength of the Assembly is reduced to 287, thus the majority mark is 144.

Interestingly, amid the ongoing battle between two Shiv Sena factions led by Eknath Shinde and Uddhav Thackeray, both sides issued separate whips to the party MLAs to vote in favour of their respective candidates during the speaker’s election on Sunday and later accused each other of violating them.

Shiv Sena MP Arvind Sawant, who is in the Uddhav Thackeray camp, said that 39 party MLAs did not obey their whip adding that they have sought their disqualification from the state Assembly.

“39 of our MLAs did not obey our whip, and didn’t follow party order, so we have sought their disqualification from new Assembly speaker Rahul Narwekar. Shiv Sena chief Uddhav Thackeray has chosen Ajay Choudhari as the leader of the group,” Sawant said.

However, Maharashtra Legislative Assembly Speaker Rahul Narwekar has taken on record the letter sent by Bharat Gogawale, who is Chief Whip of the Eknath Shinde-led faction. Gogawale said that 16 MLAs Shiv Sena violated the whip.

Narwekar received a total of 164 votes in support and 107 went to the Shiv Sena candidate’s account. During the Speaker elections, 12 members were absent and 3 legislators abstained from the voting.

In the latest development, the Uddhav Thackeray faction of Sena has also started the legal process to disqualify 16 MLAs, including Shinde. Newly appointed Maharashtra Assembly Speaker Rahul Narwekar said in the House today that he has received a letter from Bharatshet Gogawale, a whip of the Shinde faction of Shiv Sena that “16 MLAs have violated their whip and he has sought action”. I have noted this, Narwekar said.

Shinde, in his first address on the floor of the Maharashtra Assembly as a Chief Minister on Sunday, said that the decision of Prime Minister Narendra Modi and Union Home Minister Amit Shah to let him lead the government despite having more members than his side has “opened the eyes of many”.

He also said that after the collapse of the Maha Vikas Aghadi (MVA) government in the state, a “BJP-Shiv Sena government” has taken charge which is based on the beliefs of the party founder Balasaheb Thackeray.