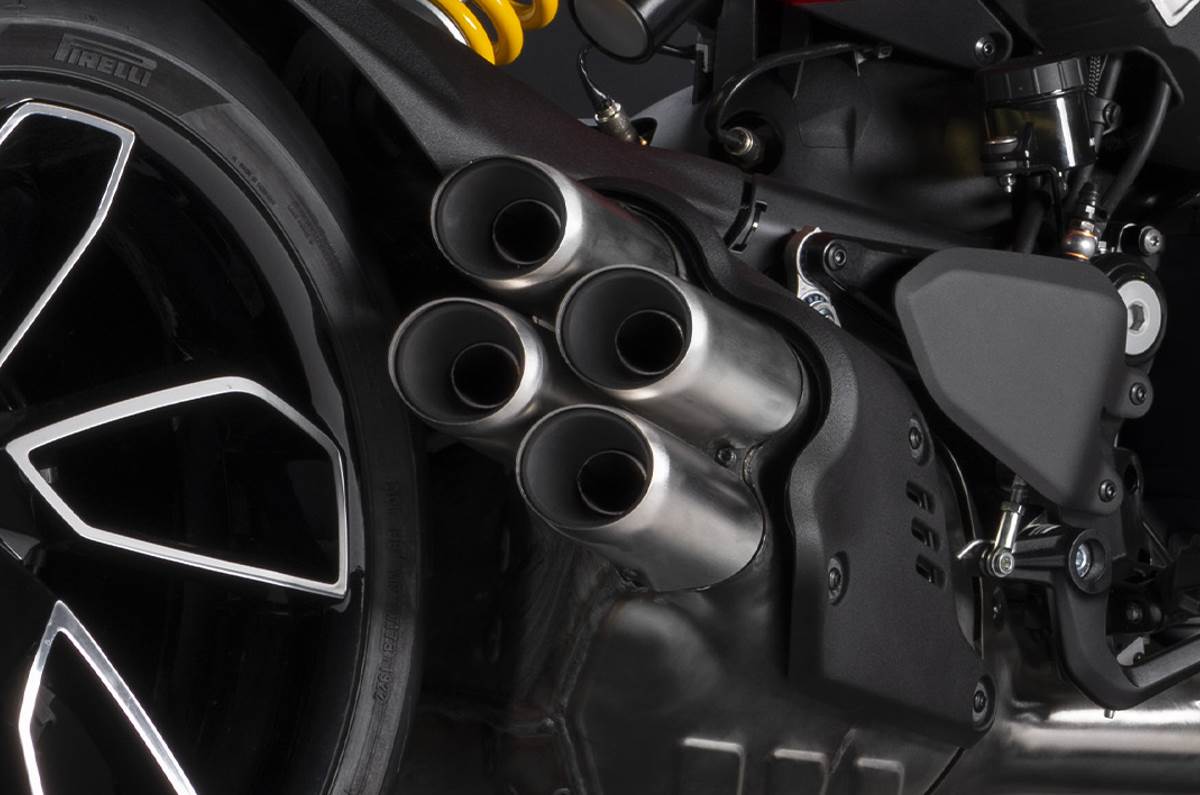 In addition to the new V4 Granturismo engine, the chassis and styling of the Diavel have also been revised.

Ducati has been steadily overhauling its flagship models, swapping them over from its traditional L-twin motors to the new 90-degree V4 engines that will shape its future. The latest to receive this treatment is the Diavel, and here’s everything you need to know about the newly introduced Diavel V4.

Obviously, the big news is that Ducati has wedged the monstrous V4 Granturismo engine into the Diavel, meaning that power output is up from 162hp on the old Diavel 1260 to 168hp on this V4. Torque is marginally down from 129Nm to 126Nm, and fuel efficiency has reduced by about 15 percent, but Ducati has countered the latter by giving the Diavel a larger fuel tank (now 20 litres), so overall range has gone up.

Another big benefit of the new motor is that valve clearance checks are now far less frequent – you only need one every 60,000km, thanks to this being the first modern-day Ducati engine to use conventional valve springs instead of the Desmodromic system.

Where the previous Diavel 1260 used a traditional trellis frame, the new Diavel V4 is held together by an aluminium monocoque construction. Overall, there have been significant weight savings on the chassis front, and the new bike tips the scales at just 236kg, laden with fluids.

Steering geometry has also been sharpened, with the Diavel V4 featuring a shorter wheelbase and steeper rake angle than before. On the downside, seat height is a little taller than earlier, but at 790mm, it’s still quite low in absolute terms.

Strangely, Ducati hasn’t announced a higher-spec ‘S’ variant, with Ohlins suspension, as you usually see the Italian company doing. While an S version may join the fold in the future, you currently get one level of trim, which comes with a 50mm fully adjustable upside-down fork, and a fully adjustable monoshock. Suspension travel at the rear has gone up by 15mm to 145mm.

If there is an S variant in the future, it will have little room for improvement in the braking department, with the stock Diavel V4 already featuring Brembo Stylema calipers biting down on twin 330mm discs up front.

The fundamental design language remains the same, so the Diavel is still a muscular power cruiser, with bits like the 240-section rear tyre and sculpted fuel tank giving the bike a bold look. But there are some distinctive touches on this new V4, with the most attention grabbing being the quadruple exhaust exits. Lighting is another area of interest, with the headlight and tail-lamp both sporting a double inverted-C pattern that’s rather striking. 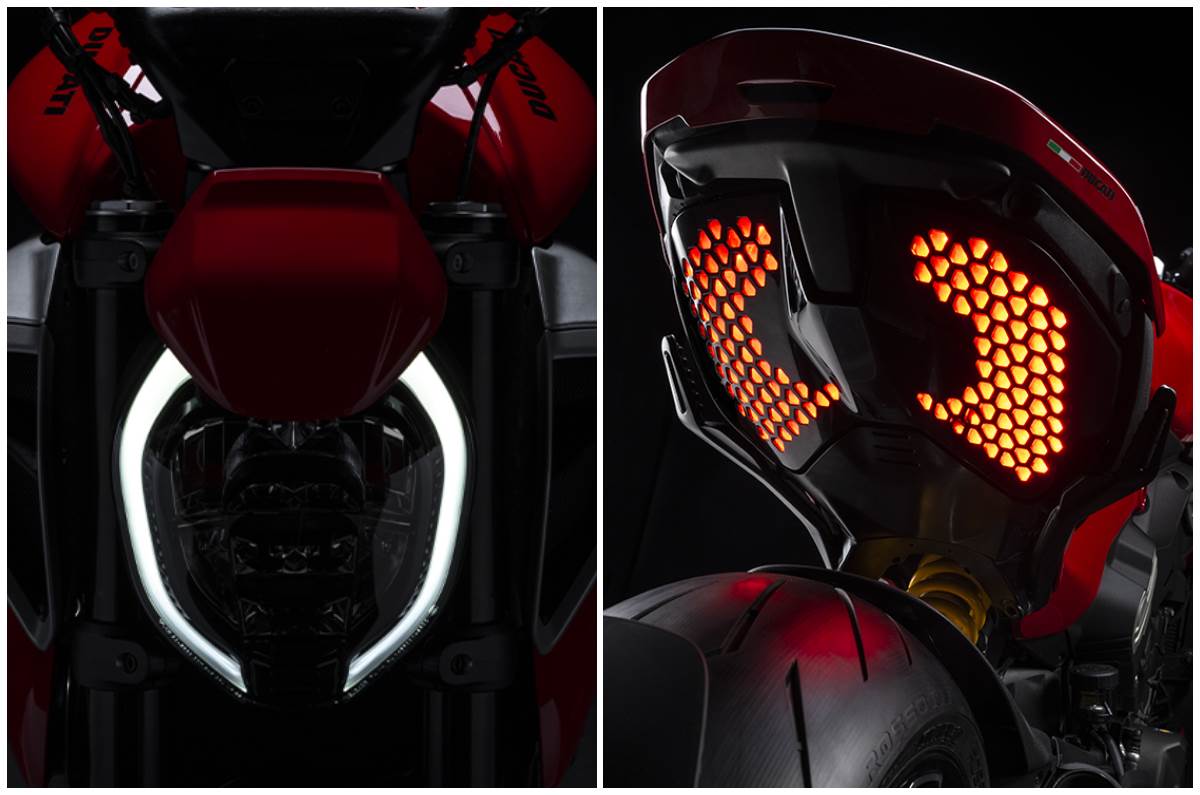 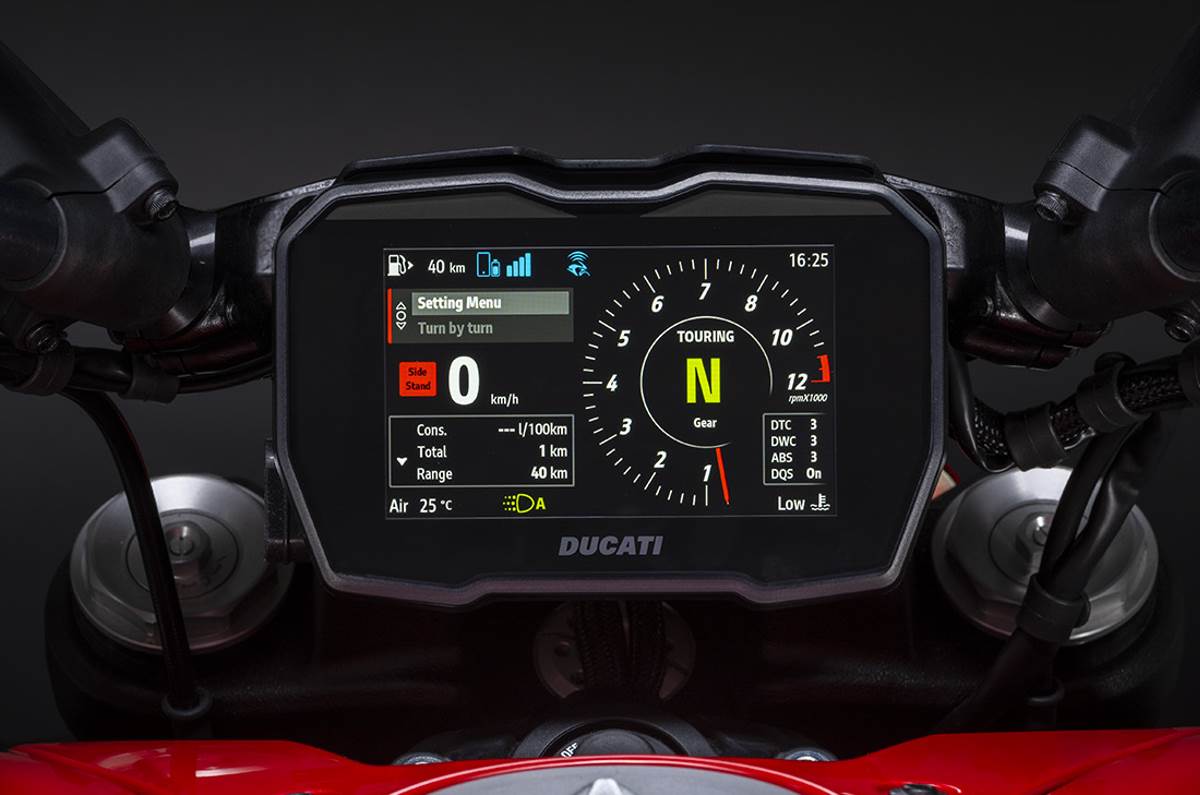 As you’d expect on any modern-day flagship Ducati, the electronics suite is expansive, containing three power modes and four ride modes. The rider aids include cornering ABS and traction control, wheelie control, launch control, cruise control and a bi-directional quickshifter. All this is managed through a 5-inch TFT display that features Bluetooth connectivity, with turn-by-turn navigation available as an optional extra.