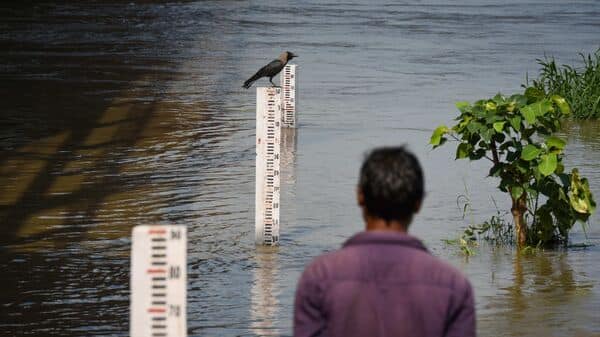 Due to the heavy rain in Delhi, the water level in the Yamuna neared the warning mark of 204.5 metres on Sunday in the upper catchment areas and is expected to breach it on September 26, officials said.

A flood alert is sounded in Delhi when the discharge rate from the Hathnikund barrage in Haryana’s Yamuna Nagar crosses the 1 lakh-cusecs mark. People living near the floodplains and in flood-prone areas are evacuated then.

The Delhi flood control room reported a discharge rate of around 45,352 cusecs at 8 pm.

One cusec is equivalent to 28.32 litres per second.

Normally, the flow rate at the Hathnikund barrage is 352 cusecs, but the discharge increases after heavy rainfall in the catchment areas. The water discharged from the barrage normally takes two to three days to reach the national capital.

The low-lying areas near the river in Delhi are considered vulnerable to flooding. They are home to around 37,000 people.

The Yamuna had breached the danger mark of 205.33 metres on August 12, following which around 7,000 people were evacuated from the low-lying areas near the river banks.

The Meteorological Department had issued a “yellow alert”, warning people of moderate rain in most places in Delhi and heavy rain in some places.

The Delhi Traffic Police had advised commuters to plan their journey accordingly.

100% relative humidity was recorded, according to the Indian Meteorological Department.

According to the Central Pollution Control Board, Delhi’s Air Quality Index was found “Good”, with under 50 AQI.

With the inputs from the PTI