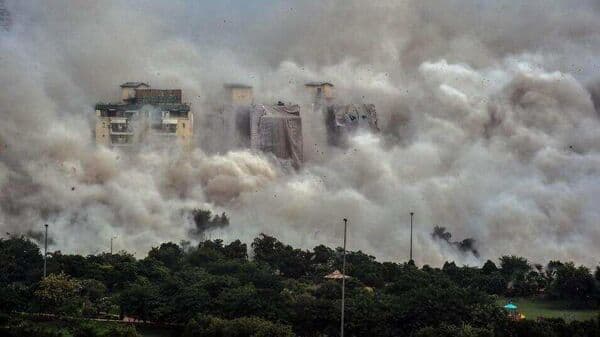 The demolition of Noida Twin Towers took place on 28 August, Sunday under expert supervision and added care to look after that residential buildings around don’t get affected. What, however, bothered environmentalists is the possibility of massive air pollution for the Delhi-National Capital Region (NCR). Notably, the national capital averted the disaster and the wind directions were the boon in disguise.

The north to northwesterly winds blew the clouds of dust that formed owing to the implosion towards greater Noida and further towards Uttar Pradesh, Hindustan Times quoted experts.

Reportedly, just an hour before the demolition was to be conducted, the wind direction around the Supertech twin towers changed towards east, which made dust particles drift towards Greater Noida and Bulandshahr instead of Delhi.

For the last one week, the direction of wind was towards the west but the change was sudden, Regional Officer, Uttar Pradesh Pollution Control Board, Praveen Kumar said.

The Indian Metrological Department (IMD) forecast also shows that the wind direction is likely to remain northwesterly in the next 24 hours. A“Wind speed on Sunday was strong, but it was northwesterly and therefore, will not impact Delhi much. Rain is also expected in Delhi on Monday, so any dust in the air even towards Delhi is likely to settle and there will not be any impact of this event,” said a met official.

National capital Delhi is no stranger to dust storm, ‘poor air quality’ or ‘severe air quality’. Dust, which comprises of coarser particles, is generally known to increase the local PM 10 concentration as opposed to PM 2.5.

“Wind direction is north to northwesterly and following the explosion, the dust began to gradually blow towards Greater Noida. Wind direction is likely to stay northwesterly till at least Monday afternoon and after that, it may switch to easterly, however, even then, Delhi is unlikely to be impacted by this dust as a change in wind direction generally leads to calm winds,” said Mahesh Palawat, vice president at Skymet meteorology.

Delhi’s air quality index (AQI) was, meanwhile, recorded in the ‘moderate’ category on Sunday, with an AQI reading over a 24-hour period recorded at 119 as per Central Pollution Control Board’s daily national bulletin, which is released at 4pm. This was slightly higher than the average 24-hour reading of 105 (moderate) on Saturday.

According to the ‘Early Warning System For Delhi’ developed by the Ministry of Earth Sciences (MoES), air quality is unlikely to deteriorate over the next few days.