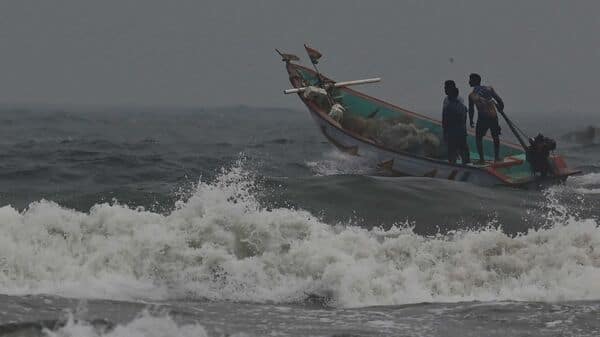 The weather office, in its daily bulletin, had earlier said that it is very likely to move west-northwestwards and intensify gradually into a Cyclonic Storm around the 07th December evening and reach the Southwest Bay of Bengal off north Tamil Nadu, Puducherry & adjoining south Andhra Pradesh coasts by 08th December morning.

“It will continue to move west-northwestwards and cross north Tamilnadu, Puducherry, and adjoining south Andhra Pradesh coast between Puducherry and Sriharikota with a maximum sustained wind speed of 65.75 kmph gusting to in kmph around early hours of December 10,” the IMD had said.

According to the weather forecasting agency, several states are likely to witness very heavy rainfall for the next couple of days under the influence of cyclonic storm Mandous.

The IMD stated that light to moderate rainfall at most places with heavy to very heavy falls at isolated places very likely over coastal Tamil Nadu, Puducherry, and Karaikal and isolated heavy rainfall over adjoining areas of south coastal Andhra Pradesh and Rayalaseema, today, Thursday.

IMD rainfall alert: What are the precautions taken by authorities?

1) Fishermen are advised not to venture into the Southeast Bay of Bengal during these days, along and off the Sri Lanka coast.

2) Puducherry Chief Minister N Rangaswamy has also held a review meeting of the Puducherry Disaster Management Authority, in view of the heavy rainfall alert. The National Disaster Response Force (NDRF) team is also on alert and ready to tackle any situation, according to ANI reports.

4) Sandeep Kumar, Commander, and Sub-Inspector, 4 battalions, NDRF Arakkonam said, “Our team is ready with all kinds of equipment. Our team members are trained in their areas. Whenever we get a call for help, we’ll immediately rush to the spot.”

5) The Andhra Pradesh’s Chittoor District Collector Y Harinarayanan has ordered the district and Mandal level officials of all departments to be vigilant and make advance arrangements for relief operations in the wake of Cyclone Mandus for four days from December 8 to 11.

6) A review was also conducted on Wednesday on the advance arrangements for relief measures to be taken in the wake of Cyclone Mandus through a video conference from the district secretariat.

7) Chittoor District Collector said that as a part of identifying the rehabilitation centers first and arranging minimum facilities for them, they want to make available those who take midday meals in schools and make essential commodities available for meal arrangements.