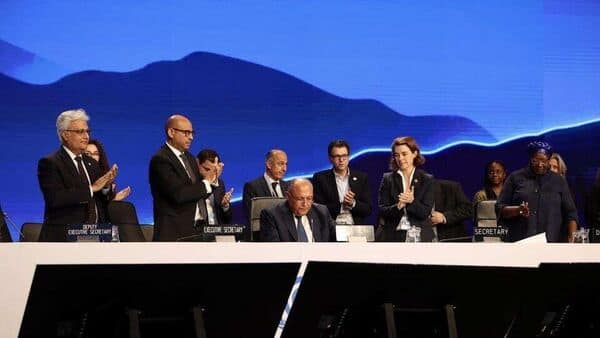 Over two weeks of UN climate negotiations in the Sinai peninsula came to an end when the final agreement for COP27 was adopted in Egypt on Sunday. Over 200 countries finally drew consensus on a deal that would set global standards with respect to tackling climate change.

Nations on the front lines of a warming world are celebrating the deal’s historic provision to create a fund to aid poorer countries in coping with the effects of climate change.

“A mission 30 years in the making has been accomplished,” said Molwyn Joseph, the minister from Antigua and Barbuda and chair of the Alliance of Small Island States (AOSIS).

But beyond loss and damage compensation fund the COP27 Summit had many more notable dimensions. Here are 10 takeaway points from the UN climate summit in Egypt.

1} The final agreement was a glaring letdown for those hoping to increase the goals of last year’s Glasgow agreement. The pledge to phase down unabated coal emissions was not expanded to include all fossil fuels in the statement, and there was no mention of the peaking of global greenhouse gas emissions in 2025.

2} There are a lot of unanswered questions surrounding the fund for loss and damage breakthrough. At Sharm El-Sheikh, no money was actually committed, and the specifics of how the fund would operate were left up to the COP28 meeting in the United Arab Emirates the following year.

Henry Kokofu, Ghanaian politician and head of the Climate Vulnerable Forum, warned that without further concrete steps there is a risk of simply creating “an empty bank account.”

3} The “mitigation work programme” was the problem that caused negotiations to drag on and made COP27 the second-longest UN climate summit. In order to achieve climate goals, it is important that nations set clear targets, plans, and metrics for emission reduction. Countries have used various standards and baselines for their targets, so commitments to date have not been held to the same standard.

4} Climate-conscious nations wished to continue the “mitigation work programme” through the year 2030. But resistance from laggards resulted in a compromise that would allow it to continue through 2026 with the possibility of an extension. If the programme is successful, its effects may go beyond those of nations simply pledging to phase out all fossil fuels politically.

5} A request to change the world financial system to better support climate goals was made at a COP meeting for the first time. The goal is to alter the mandates of multilateral development banks like the World Bank and global financial organisations like the International Monetary Fund to ensure that more funding goes to initiatives to transition to cleaner energy sources and to adapt to a warming planet.

6} At COP26, nations decided to establish the rules that would permit trading of carbon credits. A more thorough framework for the operation of such a carbon market was laid out by negotiators at COP27, which included allowing businesses to purchase credits from governments. However, experts cautioned that the regulations are still too lax.

7} The Sharm El-Sheikh agreement failed to raise ambitions on reducing emissions, despite efforts by major powers like the US, India, and the European Union. That might indicate that the 1.5 degree Celsius warming target set forth in the 2015 Paris Agreement is not met. Many countries that export oil rejected calls to phase out all fossil fuels (not just coal) and to peak global emissions by 2025.

8} The methane pledge, which was introduced in Glasgow last year, attracted more nations. 150 countries have now committed to reducing emissions of the extremely potent greenhouse gas by 30% by the end of the decade. Even China acknowledged that it has created a preliminary plan to reduce methane emissions, but it has refrained from signing the global pledge.

9} In recent weeks, there has been some significant advancement in the financing of cleaner energy transitions. Two new funding agreements for the Just Energy Transition Partnership (JETP) were revealed at COP27, moving Vietnam and Indonesia away from coal power. Additionally, South Africa received final approval from its donors for its own $8.5 billion JETP plan, and Indonesia is negotiating a $20 billion deal to phase out coal.

10} At COP27, the US and China reestablished their climate cooperation. John Kerry, the US representative for climate change, and his Chinese counterpart Xie Zhenhua announced on Saturday that formal cooperation had been resumed after being put on hold following House Speaker Nancy Pelosi’s trip to Taiwan earlier this year.