More
HomeNewsCongress' protest is to save Gandhi family; Rahul says it's to protect...
News

Congress’ protest is to save Gandhi family; Rahul says it’s to protect democracy 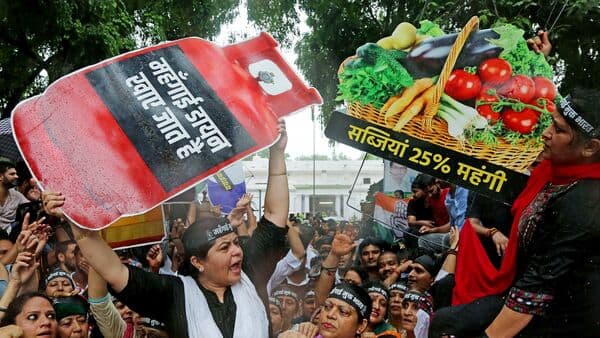 The Congress’ protest against price rise and unemployment is essentially aimed at “saving” the Gandhi family from corruption charges, Prime Minister Narendra Modi-led Bharatiya Janata party said on Friday. On the other hand, Congress leader Rahul Gandhi said the motive of the protest was to save the ‘democracy’ of India in a context that his party was not even allowed to launch a protest against the Centre. Gandhi and his sister Priyanka Gandhi Vadra were detained by the Delhi Police on Friday for holding a demonstration against food price rise and GST on essential items. Other Congress leaders were also detained for organizing a nationwide agitation against the Central government.

BJP leader hit back at Rahul Gandhi after he alleged that India is witnessing the “death of democracy”.  Former Law minister Ravi Shankar Prasad noted that it was Rahul Gandhi’s grandmother and then prime minister Indira Gandhi who had suspended people’s democratic rights by imposing an Emergency.

“Why do you blame democracy when the people of India reject you with repeated regularity,” he said and asked Gandhi if there is democracy within his party which has some “good leaders” but it is all about the Gandhi family.

If people saw dictatorship, it was during the Emergency when people, including opposition leaders and editors, were jailed, judges superseded and censorship imposed, Prasad added.

He highlighted the Enforcement Directorate’s probe against Rahul Gandhi and Congress president Sonia Gandhi in the National Herald case and said the former Congress president must answer as to how Young Indian, a firm in which the two Gandhis have a 76% stake, allegedly acquired the National Herald’s assets worth over ₹5,000 crore with the investment of only ₹5 lakh.

The judiciary refused to quash charges against them and he was now blaming institutions, the BJP leader said.

Union minister Anurag Thakur echoed the views and said the protests by the Congress from Parliament to the streets cannot turn the “truth” of corruption charges against its leaders into a lie.

“They are trying to apply pressure on the government and probe agencies after doing corruption. The BJP came to power in 2014 and promised to give corruption-free governance. This is what Modi has delivered in eight years. Probe agencies are now working against corruption done earlier,” he said.

Wearing black clothes, Rahul Gandhi stage a protest in the Parliament House complex on Friday and took out a march towards the Rashtrapati Bhawan.

The protesting MPs of the opposition party raised slogans against the government demanding that the GST hike on essential items be withdrawn. However, the protesters were stopped by the Delhi police and not allowed to proceed toward the Rashtrapati Bhawan. Gandhi, along with senior party leaders K C Venugopal, Adhir Ranjan Chowdhury, and Gaurav Gogoi were detained and taken away in a police bus from Vijay Chowk.

Speaking to the media, Gandhi said, “We are here to raise the issue of price rise,” and added, “democracy is being murdered”.