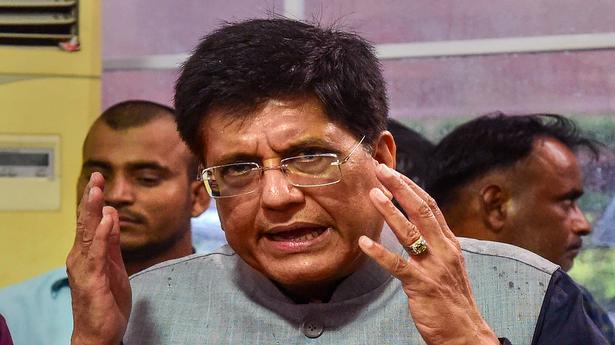 Union minister Piyush Goyal on July 21 asked the industry to avail the benefits under production-linked incentive schemes to become globally competitive as well as reduce the dependence on subsidies.

While interacting with white goods industry at a FICCI event, the commerce and industry minister recalled the success of the LED programme which he launched in January 2015 and said that it boosted LED business in the country while reducing energy consumption without a single penny spent from the government exchequer.

Mr. Goyal was the Power Minister when the LED programme was launched.

“This is something (PLI)… to encourage you to take first few steps to compete in the global market, scale your business and give you that initial push but in the long run no country in the world has succeeded to become a developed nation or a prosperous on the back of government subsidies or clutches,” Mr. Goyal said.

The Minister said that electronics companies can help the country create jobs as well as surplus for exports.

In March, the commerce and industry ministry had reopened the application window for its ₹6,238-crore PLI scheme for white goods—air-conditioners (ACs) and LED lights—with an aim to accommodate more players under the scheme.

Under the PLI for white goods, a total of 61 white goods companies have participated, which included Adani Copper Tubes, LG Electronics, Wipro Enterprise and Dixon Technologies.

Industry chamber FICCI Electronics and white goods manufacturing committee and CEO Amber Enterprises Jasbir Singh said that all investment committed under the PLI scheme will be completed by March 2023.

FICCI Electronics & Manufacturing Committee chair Manish Sharma said that industry has achieved yet another milestone for PLI in white goods and LED with 61 investors setting up component manufacturing.

“The air conditioner industry has seen significant progress with investments in component manufacturing. Our vision, as an industry, is to improve local value addition from current levels of 25 per cent to 75 per cent in the next few years,” Mr. Sharma said.