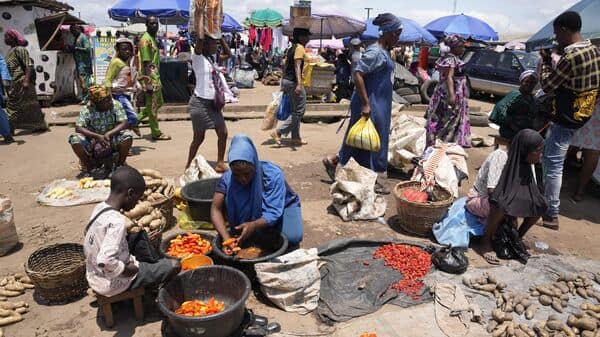 Inflation continues to rattle the global economy, forcing monetary authorities to strengthen efforts to extinguish it. Consumer prices in the US increased last month by more than forecast, which will likely prod the Federal Reserve to raise interest rates by 75 basis points for a third-straight meeting this coming week.

UK inflation remained close to a four-decade high and the economy barely expanded as industrial production and construction weakened. In Argentina, inflation shot up the most in three decades and prompted the central bank to raise its benchmark rate to a whopping 75% in an effort to prop up its currency.

Here are some of the charts that appeared on Bloomberg this week on the latest developments in the global economy:

US consumer prices were resurgent last month, dashing hopes of a nascent slowdown and likely assuring another historically large interest-rate hike from the Fed. Against a backdrop of robust labor market conditions that’s driven up wages, odds favor the central bank becoming that much more aggressive to take more wind out of the economy’s sails with the goal of bringing inflation down.

President Joe Biden hailed a tentative railway labor agreement, one that he helped broker and that averted an economically perilous nationwide work stoppage less than two months ahead of the November midterm elections. The stoppage would have been the largest of its kind since 1992 and threatened to cost the world’s biggest economy more than $2 billion a day.

Britain’s inflation eased from its highest rate in four decades after petrol declined, still leaving the pace of price increases uncomfortably high for the Bank of England. The Consumer Prices Index rose 9.9% in August from a year ago, compared with 10.1% in July.

The UK economy recovered more slowly than expected from a slump triggered by an extra public holiday in June, with industrial production and construction both shrinking.

Japan’s trade deficit ballooned to a record in August that highlights the increasing pain of the weak yen as import costs spiral upwards, adding to pressure on the country’s economic recovery.

China’s economy showed signs of recovery in August as Beijing rolled out stimulus measures to counter a slowdown, although a property market slump and Covid outbreaks continue to weigh on the outlook. Industrial production, retail sales and fixed-asset investment all grew more last month than economists expected.

Argentina’s central bank raised its benchmark interest rate for the ninth time this year to 75% in a bid to shore up its currency and curb inflation nearing 100%. Central bankers made incremental rate increases early in the year but over the past three months they have ramped up hikes, with a combined 23 percentage point increase since July.

India’s central bank, which last month vowed to do “whatever it takes” to fight inflation, is expected to refocus efforts toward its own version of a soft landing where it tackles price gains while trying to ensure growth remains among the world’s fastest.

From Mexico to Brazil, persistently high inflation is widening the gap between rich and poor in what is already the world’s most unequal region. It’s stoking political upheaval that could be a foretaste of what lies ahead as policy makers the world over struggle to meet demands to increase social spending.

Around the world, soaring borrowing costs are squeezing homebuyers and property owners alike. From Sydney to Stockholm to Seattle, buyers are pulling back as central banks raise interest rates at the fastest pace in decades, sending house prices falling.