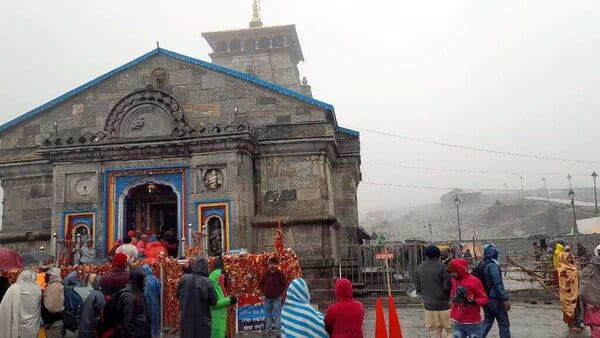 The Char Dham Yatra was halted on Tuesday after snowfall and rain hit the pilgrimage en route to Kedarnath and Yamunotri temples in the Garhwal Himalayas.

Kedarnath began receiving snow early on Tuesday while the lower areas were lashed by rains prompting the authorities to stop the pilgrims for their safety in Gaurikund and Sonprayag.

Pilgrims going to Yamunotri were also halted in Janakichatti, the last stopover on way to the famous shrine, as the weather turned worse in the afternoon.

Badkot subdivisional magistrate (SDM) Shalini Negi said Yamunotri-bound pilgrims were stopped in Janakichatti as a precautionary measure. They will be allowed to proceed on their onward journey after the weather clears, she said.

Pilgrims halted on way to the shrine on Monday due to bad weather were permitted to go to the temple on Tuesday morning, she said, adding they have already returned after offering prayers there.

Rudraprayag District Magistrate Mayur Dikshit also said the pilgrims on way to Kedarnath were halted in Sonprayag and Gaurikund as the weather is bad and it is not safe for pilgrims to go beyond these points for the time being.

Once the weather improves they will be allowed to visit the temple, he said.

An unprecedented number of pilgrims are visiting the Himalayan temples this year with the Covid-induced restrictions no longer in place.

More than nine lakh pilgrims have already paid obeisance at the Himalayan temples in Garhwal region of Uttarakhand since the start of the pilgrimage on 3 May.