More
HomeTechByju’s FY21 financials likely by Sept 6; SMEs may have to hire...
Tech

Byju’s FY21 financials likely by Sept 6; SMEs may have to hire infosec officers

Days after reports said the Ministry of Corporate Affairs asked Byju’s to explain why it hadn’t filed its audited financials for 2020-2021, the edtech company has told its debt investors the audited results – already 17 months late – are expected by September 6.

Edtech major Byju’s has told its debt investors that it is likely to finalise its audited financial results for FY21 by September 6, people briefed on the matter said.

The online education firm had scheduled a call with investors earlier this month but had to postpone it, citing a delay in the formal closure of the audited financial reports.

Byju’s is expected to hold its board meeting next week once it receives the final report, which will be presented to the directors.

People aware of the matter said that Bengaluru-based Byju’s has indicated to its debt investors that the financials will be without any qualification. This means there are no separate observations on the audited numbers which will be presented by the company.

17-month delay: The development comes after the Ministry of Corporate Affairs (MCA) asked Byju’s parent firm Think & Learn for the reasons behind the 17-month delay in filing its audited accounts. 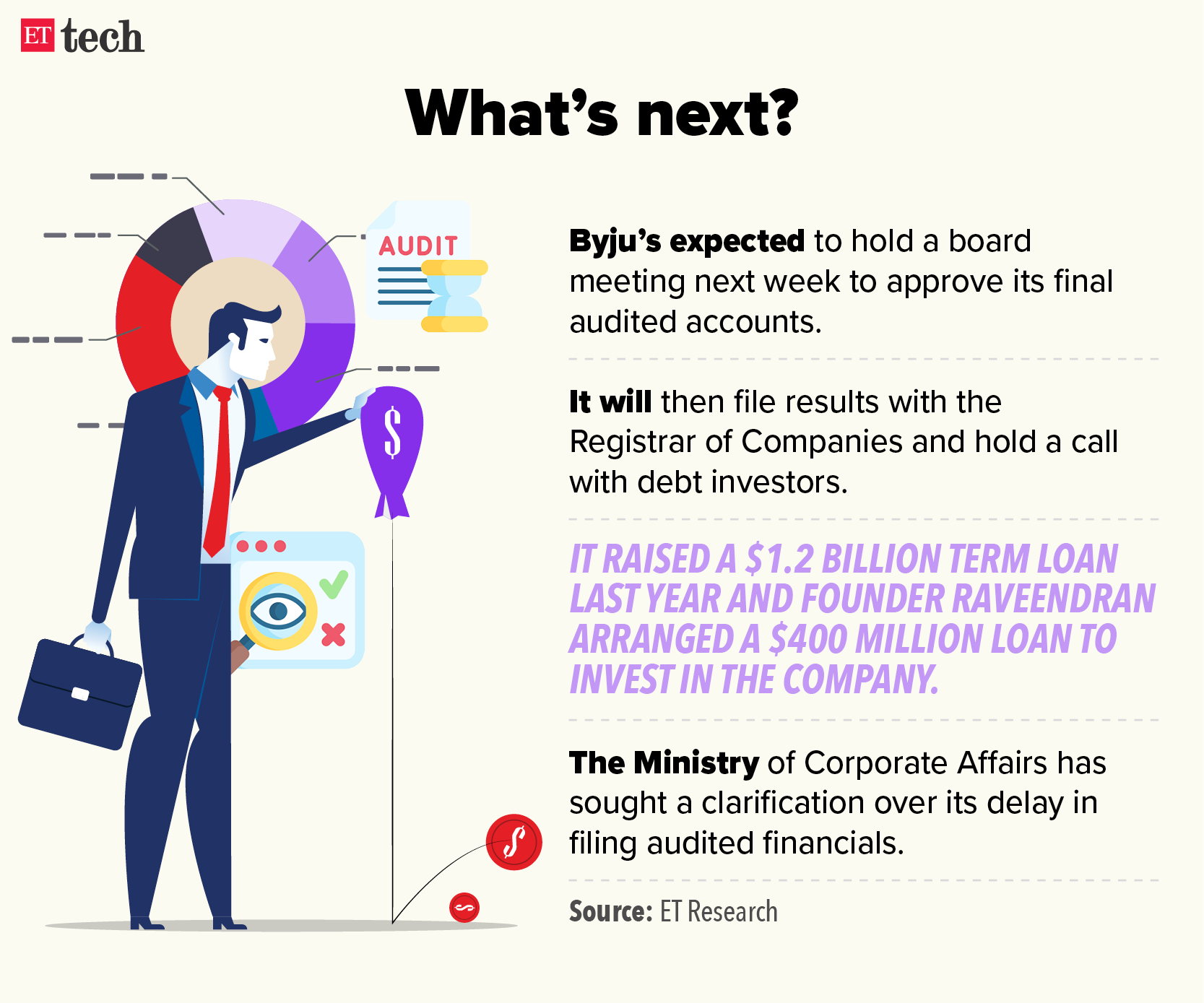 Differences with Deloitte: The edtech major’s revenue recognition has been a point of contention between the company and Deloitte, according to multiple people in the know. The company is said to have moved parts of revenue recognised in FY21 to FY22 as per recommendations from the auditor, citing Ind AS 115 rules, they said.

In an interview with ET in May, founder Byju Raveendran had said that delay in filing its financials was on account of multiple acquisitions the firm had closed. 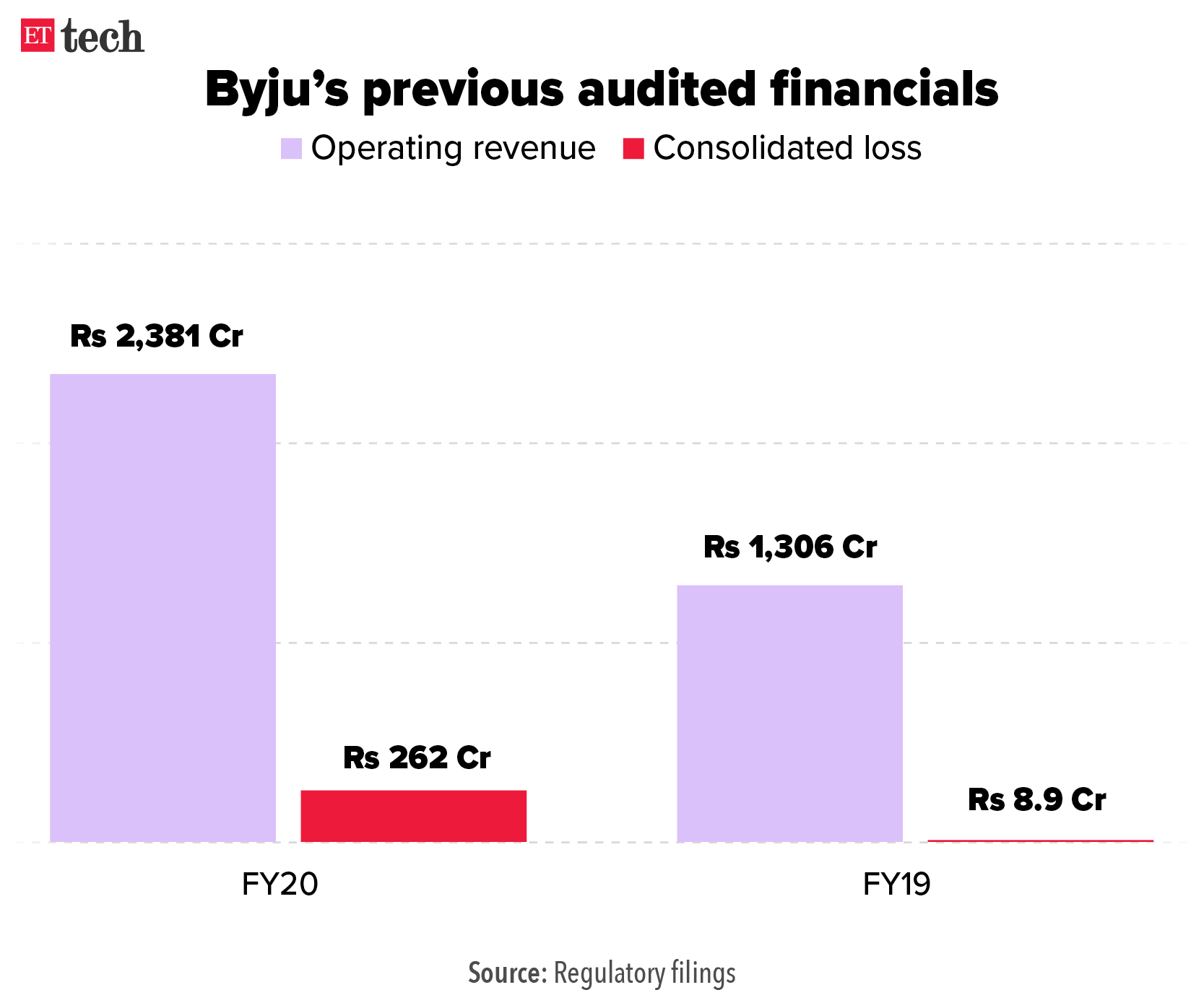 Raveendran said the company is aiming to close FY23 with a revenue of around Rs 17,000 crore. It had posted operating revenue of Rs 2,381 crore in FY20, up from Rs 1,306 crore in FY19, according to regulatory filings. Its consolidated loss widened to Rs 262 crore in fiscal 2020 from Rs 8.9 crore a year earlier.

MSMEs may be told to hire information security officer 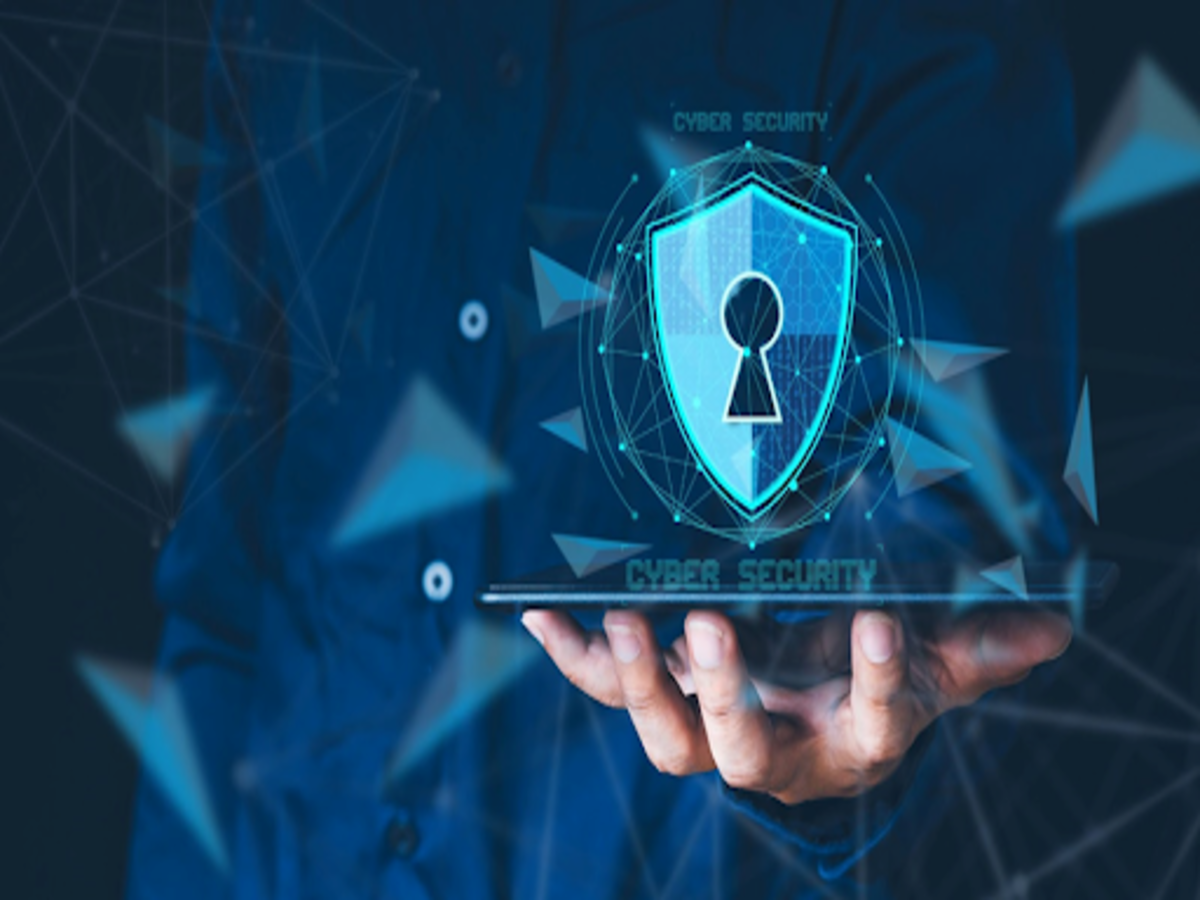 To shore up the cybersecurity ecosystem, the Ministry of Electronics and Information Technology (MeitY) may ask micro, small and medium internet enterprises to appoint chief information security officers (CSIO), sources in the know of the development told us.

Yes, but: This may not be made mandatory for now, to ensure that there is no “sudden compliance burden” on MSMEs, a source said.

“Cyber hygiene has to be improved. MSMEs are among the most vulnerable to cyberattacks; more often than not, they do not have the basic cyber-defence systems in place. The idea (of a CSIO) is to ask them to remain more vigilant,” a senior ministry official said.

The ministry will, meanwhile, also reach out to various MSMEs and seek the status of their capacity-building exercises, the official said. An official notice asking them to be ready before September 25 may be sent soon, the official added.

Rules deferred: Cert-In had on April 28 issued a set of guidelines which mandated that companies must report any cybersecurity incidents to the government as well as Cert-In. These guidelines, the agency had said, applied to all companies, including government bodies.

Following pushback and several rounds of meetings between the ministry and industry representative bodies, Cert-In had extended the deadline for MSMEs to comply with the new guidelines from June 28 to September 25. 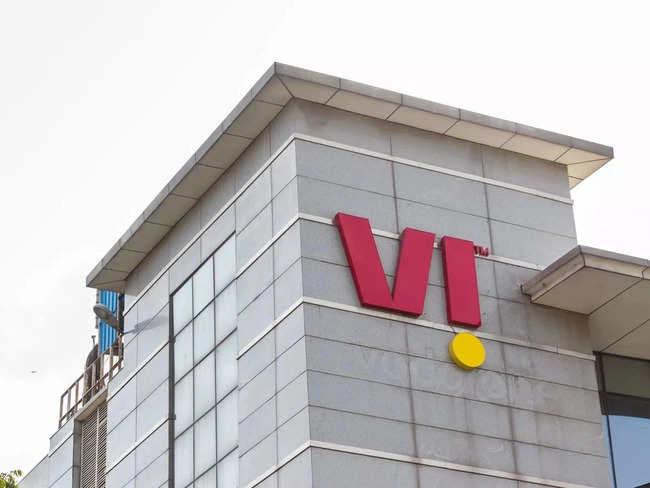 Multiple vulnerabilities in the system of Vodafone Idea have exposed its customers’ personal data including call logs of nearly 301 million people including all its 20.6 million postpaid users over the last two years, cybersecurity research firm CyberX9 has alleged in a report.

Vi denied any data breach and claimed the report was false and malicious.

Catch up quick: The CyberX9 report, released on Sunday, claimed that the information of Vi customers exposed to the internet includes but is not limited to, all call records, all SMS records, internet usage details , location details, full name, residential address, and more.

It urged the government to order an independent and fair security audit of Vi as it has been exposing millions of customers’ call logs and other sensitive and confidential data for at least about the last two years. In that massive time period, multiple criminal hackers might have stolen this data, it alleged.

Denial: Rejecting the report as false and malicious, Vi said it has a robust IT security framework to keep customer data safe and regularly conducts checks and audits to further strengthen its security framework. 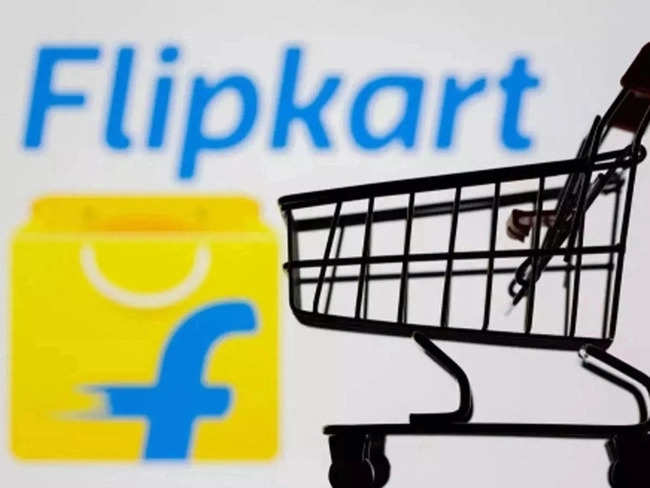 Flipkart will invest over Rs 3,600 crore in the next three years to set up three new giant automated fulfilment centres. This includes one in Manesar which is under construction, and two new ones in the south and West Bengal, said Flipkart Group’s senior vice president and head of supply chain Hemant Badri.

Details: The group has already set up one such big-box facility in West Bengal at Haringhata, which it claims is the largest such facility in Asia.

The Manesar one will be operational in 2024. Badri said these centres enable two times more storage space per square feet, 30-50% more efficient with lower capital and operating costs, and helps to reduce shipment times.

Festive season: Talking about the up-coming festive season and Flipkart’s biggest discounting sale Big Billion Days (BBD), Badri said demand will revive and this year’s sale will be the best ever festive sale. He said the company is gearing up for this by hiring over 50,000 people for supply chain and last mile.

As the US looks to rediscover its mojo in advanced semiconductor manufacturing through a series of policy actions, India is charting out its own roadmap to manufacture chips and join a coveted Asian league with homegrown technology and manufacturing capabilities.

The country has revived a decade-old attempt to woo chip makers, starting with a $10 billion incentive package for the sector that one industry analyst indicated was smaller than the annual spend on semiconductors by some manufacturing nations.

Challenges: In its attempt to gain a toehold in the global semiconductor supply chain, New Delhi has been examining the three applications since February to approve large monetary incentives for backing chip factories in the country, but it faces a two-fold challenge.

First, it needs to arrive at a decision on which of the applicants – ISMC Analog, IGSS Ventures, or Vedanta-Foxconn – should be backed.

Second, the country needs to account for the at least two-year period it might take for applicants to build fabs, and the innate cyclicality of the market might force companies to tighten their belts or slow investments.

Paytm appoints financial services veteran GS Sundararajan to its board 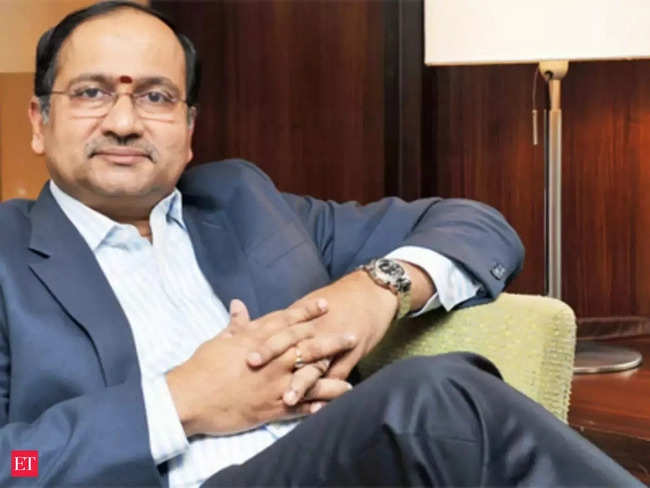 One 97 Communications Ltd., which runs Paytm, has appointed financial services veteran GS Sundararajan as an independent director to its board, the company said in a stock exchange filing.

Sundararajan has been appointed for a term of five years until August 27, 2027. He was earlier the group director of Shriram Group and was also the CEO and managing director of Fullerton India Credit Company Ltd., a registered non-banking finance company which caters to retail and commercial mass market customers.

Retirement: Paytm also announced the retirement of long-time independent director, Mark Schwartz, upon completion of his tenure. Paytm had appointed Schwartz, former chairman of Goldman Sachs’ Asia Pacific region, to its board in October 2016.

Last week Paytm shareholders approved the resolution to reappoint founder Vijay Shekhar Sharma as managing director of the company for five years, from December 19, 2022 to December 18, 2027. 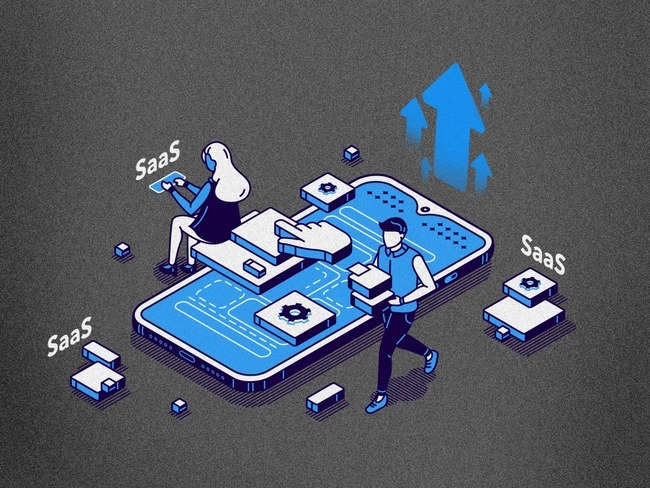 Rise and rise of India SaaS: In the past few years, Indian SaaS companies have not only caught up with their global counterparts but have also showcased the potential to surpass them and become trendsetters in this space.