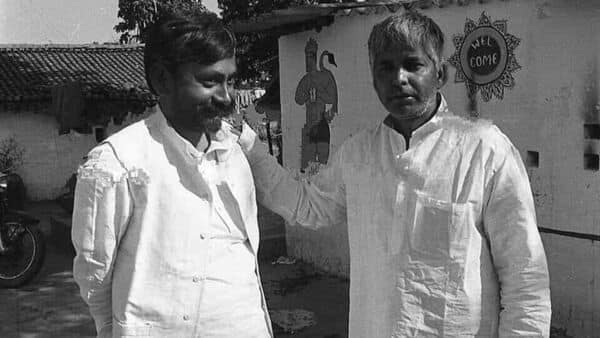 Tej Pratap Yadav has shared a vintage pic of Bihar Chief Minister Nitish Kumar and father Lalu Prasad Yadav and called them brothers who have stood by each other over the years. “When no one supports you in the family, your brother still stands by your side,” the former Health Minister of the state said.

After meeting with Congress leader Sonia Gandhi on August 12, deputy chief minister Tejashwi Yadav declared that Nitish Kumar’s decision to establish the Mahagathbandhan administration in Bihar was a “slap on the BJP’s face” and that such coalitions of opposition parties will be reproduced nationwide.

The head of the Rashtriya Janata Dal (RJD), who met Gandhi at her 10 Janpath residence in this city, charged that the BJP was trying to eliminate regional parties and claimed that if they were, the opposition and democracy would follow suit.

Also Read: I had to keep my party safe, act as per people’s wish: Nitish Kumar

Yadav, who also met with the general secretaries of the CPI(M) and the CPI, Sitaram Yechury and D Raja, claimed that the pre-election members of the Mahagathbandhan (grand coalition) had applauded Nitish Kumar’s choice.

All parties have banded together to oppose the BJP in the Bihar Assembly, according to Yadav, who also predicted that this will now be done nationwide. The chief minister, Nitish Kumar, and Yadav, who serves as his deputy, will soon be joined by other members of the government.

Lalu Prasad, the leader of the Rashtriya Janata Dal, is in Delhi during Yadav’s visit, and rumour has it that the two have discussed finalising the names of ministers. Gandhi and Yadav spoke on the enlargement of the cabinet as well.