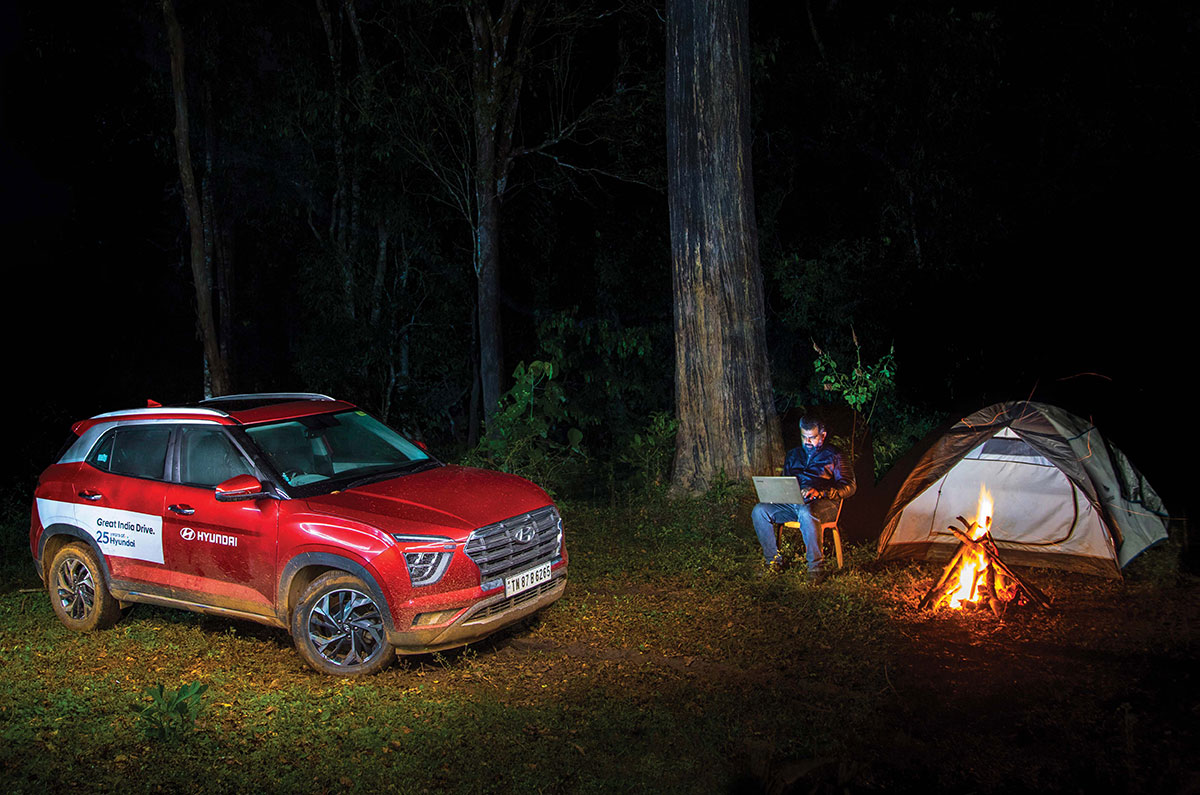 There’s nothing to hear but the crackling bonfire and the shrill chirp of insects. The air around is cold, and it turned out to be a bright idea to pack a leather jacket along. There’s nothing but pitch darkness around, and for good reason. This is the deep end of North Karnataka’s dense forests, near the town of Yellapur. Out here, even a raging fire isn’t good enough for warmth. The Creta parked alongside is the only comfort we’ve allowed ourselves. Oh, and the Internet.

Isn’t it amazing, how the internet has reached everywhere? Even here, in the surreal, if intimidating forest! In a place such as this, you’d perhaps struggle to find clean drinking water – even if you faintly hear a gushing river – and, unless you happen to be Bear Grylls, you wouldn’t really know what to eat. Thanks to the Internet, though, you could, very simply, find your way out of here. That’s if you’re in a hurry. We weren’t. The plan was to stay, enjoy the peace and quiet, while we looked over our shoulders at just how incredibly far the Internet has gotten itself and, along with it, us as society. 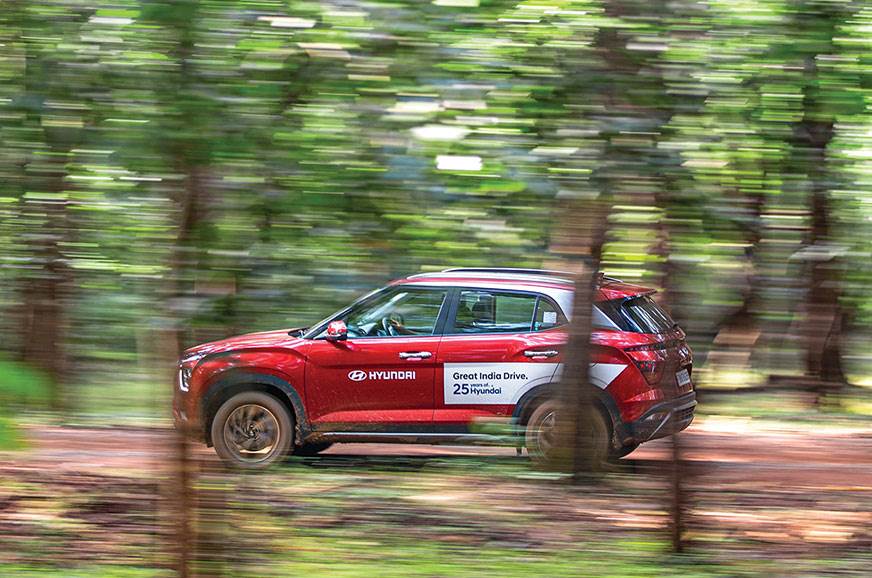 The Creta’s big-SUV virtues make a drive through dense forests a walk in the park.

We are, of course, on the Hyundai Great India Drive, our annual excuse to get out and explore our beautiful country, but on this journey, we’re doing something we haven’t before. In the past, we have met some of the most amazing people, scaled incredible heights and basked in some truly spectacular views, but this time, our chase involves an everyday phenomenon, something that we can’t quite imagine life without and yet, something that is an invisible force. The Internet has transformed everything we do – from the content we consume to even the way we travel – and it can be said convincingly that it has made our lives significantly better. To think it wasn’t even around in India only a quarter of a century ago seems incredulous, right? Around the same time as when we were sending emails to each other ‘for fun’, Hyundai set foot on Indian soil and, with the Santro, went on to transform how we perceived cars. That it would eventually make endeavours to go beyond mobility is something nobody could have imagined. 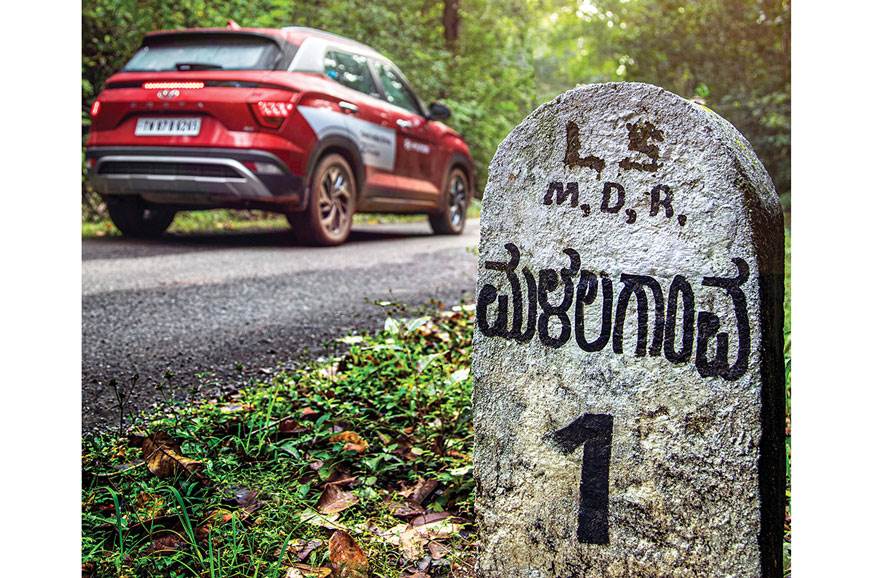 With the Internet and the capable Creta, you’ll get to your destination, no matter what.

Had it not been for the Internet, we probably wouldn’t even have found our way to this campsite, 600km from Mumbai. In all honesty, it still wasn’t particularly easy getting here, given the lack of distinguishable visual features, especially when seen on through the satellite view of a map, but at least we had a firm sense of where we needed to be – even if not exactly how to get there. In a forest as raw as this, nothing is permanent – certainly not the tracks paved by the odd farm tractor. With nearly a dozen forks in the road – we almost took the wrong turns everywhere – our sense of direction and ability to comprehend a map were put to an extreme test. It did make for great learning, though! Oh, and it was nice to be able to experience the intimidating energy of the forest, while still being pampered by rather nice ride quality and ventilated seats! 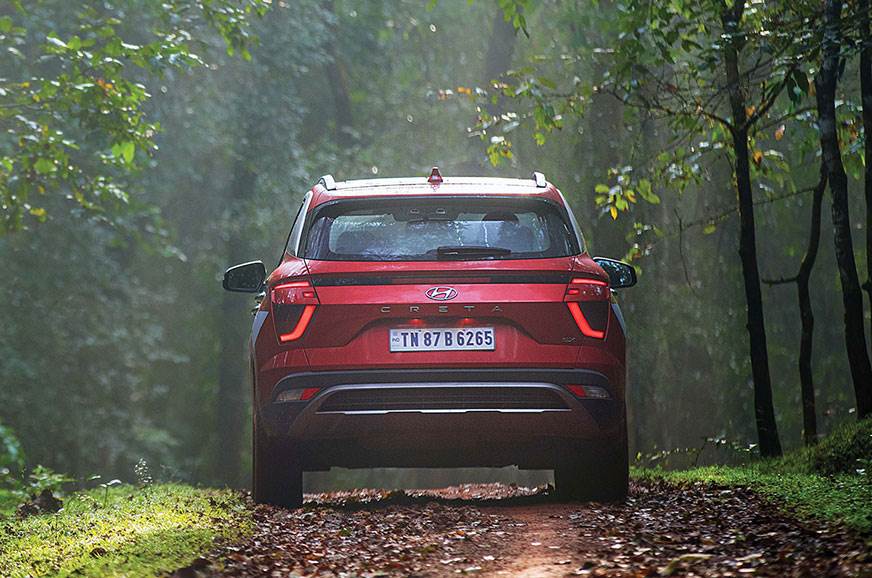 Typically, driving on a road like this – especially inside a forest – would have you very worried. But not this time. The Creta proved to be more than capable of handling the rough and slushy stuff – some of it was seriously hardcore – thanks to its generous reserves of torque and inherently poised track. With a little help from the ample ground clearance and also traction control, we finally did reach our destination in daylight and immediately got around to setting up camp. 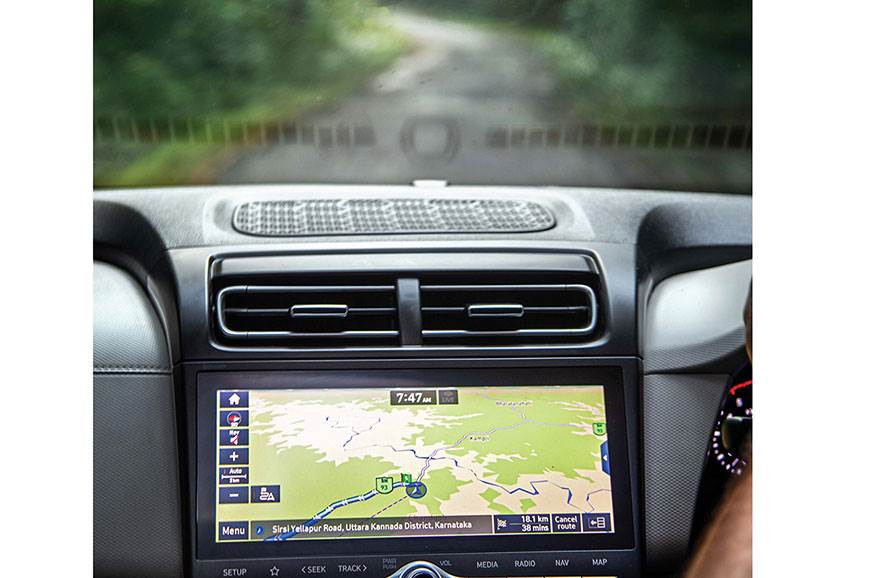 Navigating through forests tests your sense of direction.

The long, quiet night was, thankfully, an uneventful one. The sky had opened up to reveal a gazillion stars, a view us city dwellers remain cruelly deprived of, and after a piping hot dinner, sleep wasn’t hard to come by. The next morning, with an agenda to do no more than explore the forest and possibly find a nice breakfast (read: not something boiled in a bag), we set off from our campsite. In a little while, with some help from the Internet and the Creta’s superb in-built navigation system, we found our way out of the surreal forest and onto the nearest state highway. The punchy engine made light work of the beautiful winding tarmac roads, and the Creta’s sure-footedness made the drive a breezy affair. Soon enough, we found the other half of what makes life on the open road so romantic (other than driving, that is) – a quaint and charmingly rural chai stop. 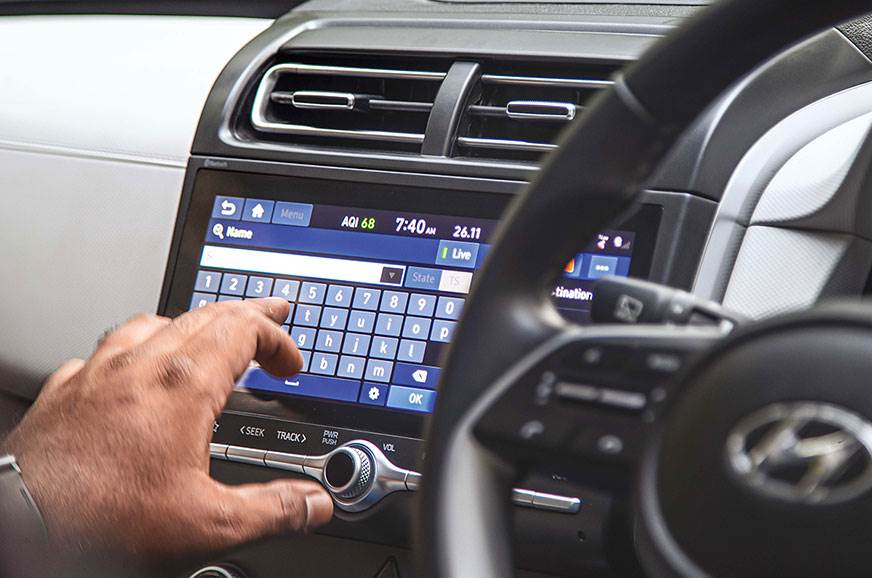 It’s here that we were served an elaborate moment of introspection, in addition to the chai and snacks we’d come looking for. The cafe turned out to be a sort of oasis for travellers, serving as a restaurant, a grocery store and somewhere you could grab essential utilities. With not a soul around for miles – just a ribbon of impeccable tarmac snaking through a luscious green forest – we had the cafe to ourselves. It was towards the end of the meal that we spotted, among the somewhat overzealously packaged food items, a QR code proudly placed atop a large packet of biscuits. This couldn’t have been real… And yet, it was.

The cafe’s gracious owner beamed as he pointed us in the direction of the QR code, once we had wiped the last traces of a tangy chutney of our plates. It was a moment that saw our language barrier evaporate. What could, potentially, have been a harrowing exchange – as it so often tends to be, especially in matters of trade – was now a seamless, stress-free and extremely convenient procedure. We said our thanks and goodbyes – that, fortunately, requires something that transcends language – and steered the Creta back towards our temporary home in the woods. 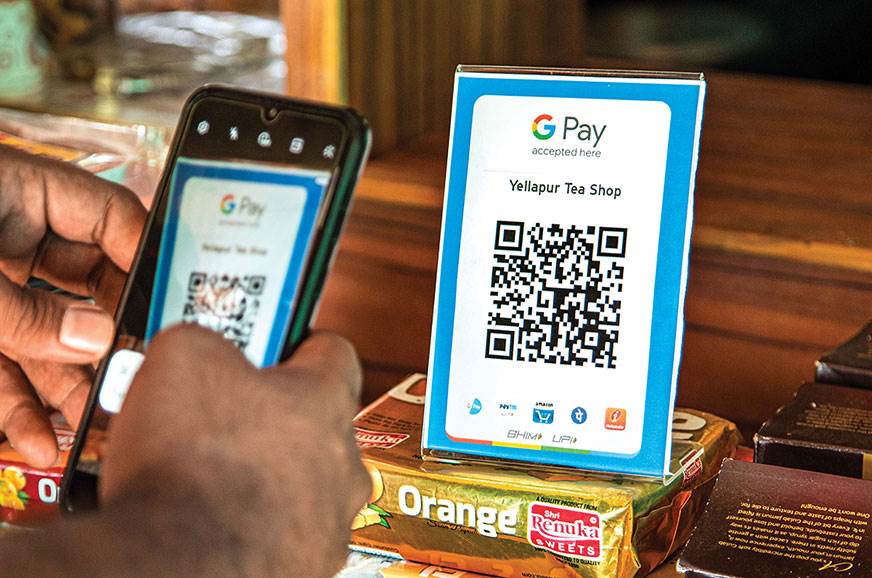 The Internet has made cashless economy a convenient reality, pretty much anywhere in the country.

It’s on the drive back, with the towering trees forming a fascinating blur through the panoramic sunroof, that the impact of the Internet descended on us. What is it about the internet that makes it the invisible force that it is? Come to think of it, we’re a country that isn’t even a hundred percent electrified yet, so the internet boom seems almost like an extraordinary one. Think about it. What started, even just in India, as a mode of sending emails – that too, largely fuelled by no more than wonder and amazement – is now, in such a short span of time, powering everything – from the content we consume to the cars we buy and just so much more. Indeed, as of March 2021, India has 825 million internet users, a number that appears even more staggering when you consider the number of internet users in 1996 – zero. 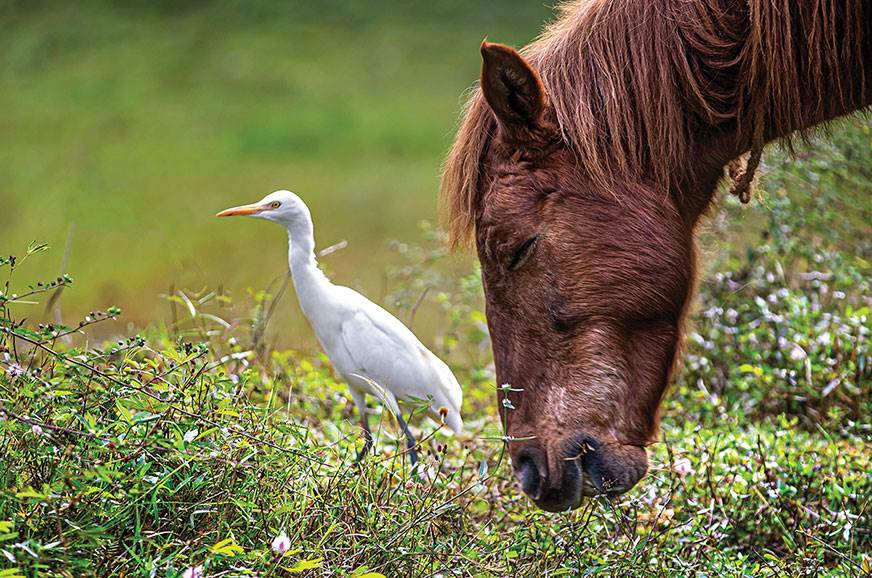 Just like the cars we so love to drive, the Internet has brought about a revolution in the way we live and has truly brought about progress for humanity. But, while the internet is truly a superpower, it’s important to use it wisely, and to remember that life is about greater things than likes and followers. Especially in a soothing place such as this, that photograph you so wanted to post can wait!

Today, thanks to the internet, you can go anywhere you like, just any place on the map, meet people, learn about things, have new experiences – all of it, without the fear of unknown hazards. What the Internet does, quite like the Creta, for instance, is put you at ease. Also, contrary to what some think, the Internet hasn’t taken away the adventure from our lives. It has, in fact, empowered us to set off on even greater adventures – ones that go far beyond planet Earth as well! If that’s not progress for humanity, what is?