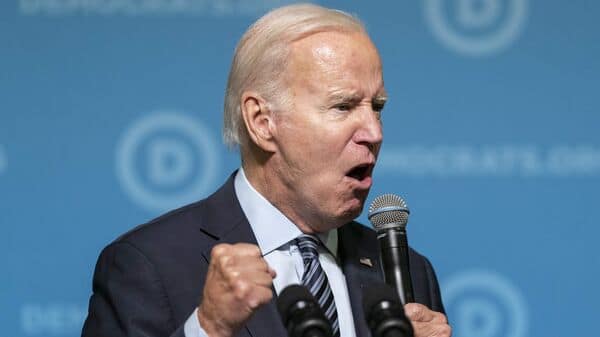 President Joe Biden said he warned Chinese President Xi Jinping it would be a “gigantic mistake” to violate sanctions imposed on Russia, but that there’s been no indication that Beijing has provided weapons to Moscow for its invasion of Ukraine.

Biden, according to excerpts from an interview with CBS’s “60 Minutes” airing Sunday, said he spoke with Xi shortly after the Chinese president met with Russia’s Vladimir Putin during the Olympics in February. Russia invaded days after the games’ closing ceremony.

“Not long after that, I called President Xi — not to threaten at all, just to say to him, ‘we’ve met many times.’ And I said, ‘if you think that Americans and others are going to continue to invest in China based on your violating the sanctions that have been imposed on Russia, I think you’re making a gigantic mistake, but that’s your decision to make,’” Biden said.

He didn’t specify when the call took place, but the statement echoes a US readout of a call between the two leaders in March, after which the US said Biden “described the implications and consequences if China provides material support to Russia as it conducts brutal attacks against Ukrainian cities and civilians.”

Biden told CBS there’s so far no sign of material support for Russia by China. “Thus far, there’s no indication they’ve put forward weapons or other things that Russia has wanted,” he said, declining to elaborate.

Even without any signs of China violating sanctions, economic ties between the two countries are already strained. The White House has taken steps to secure domestic supply chains, including in semiconductors, to cut its reliance on the Asian nation and has increased scrutiny of foreign investments in the US. Biden also continues to review whether to ease tariffs imposed on Chinese goods by his predecessor, Donald Trump.

Xi and India Prime Minister Narendra Modi expressed concern last week about Putin’s invasion, as a Ukrainian counteroffensive pushes Russian forces back in parts of the country. Putin told Xi he understands China’s “questions and concerns,” while Modi told Putin that “today’s era is not one for war.”