Arjun Kapoor and Malaika Arora Have Been Dating For a Long Time Now (Image credits: Instagram)

Arjun Kapoor and Malaika Arora have been dating each other for a while now. They made their relationship official in 2019.

It’s wedding season for Bollywood! From Vicky Kaushal-Katrina Kaif to Ranbir Kapoor-Alia Bhatt, several celebrity couples tied the knot recently. However, are you wondering who is next in line? Well, a fashion policing Instagram account was also wondering the same and therefore they decided to ask Arjun Kapoor if he is planning to marry his ladylove Malaika Arora soon.

When the Instagram handle reportedly texted Arjun asking ‘Shaadi Kab?’, the actor came back with a hilarious response. If a screenshot shared by the social media handle is to be believed, the actor tagged the question ‘hard’ and wrote, “I’ll get married when u reveal ur identity…” 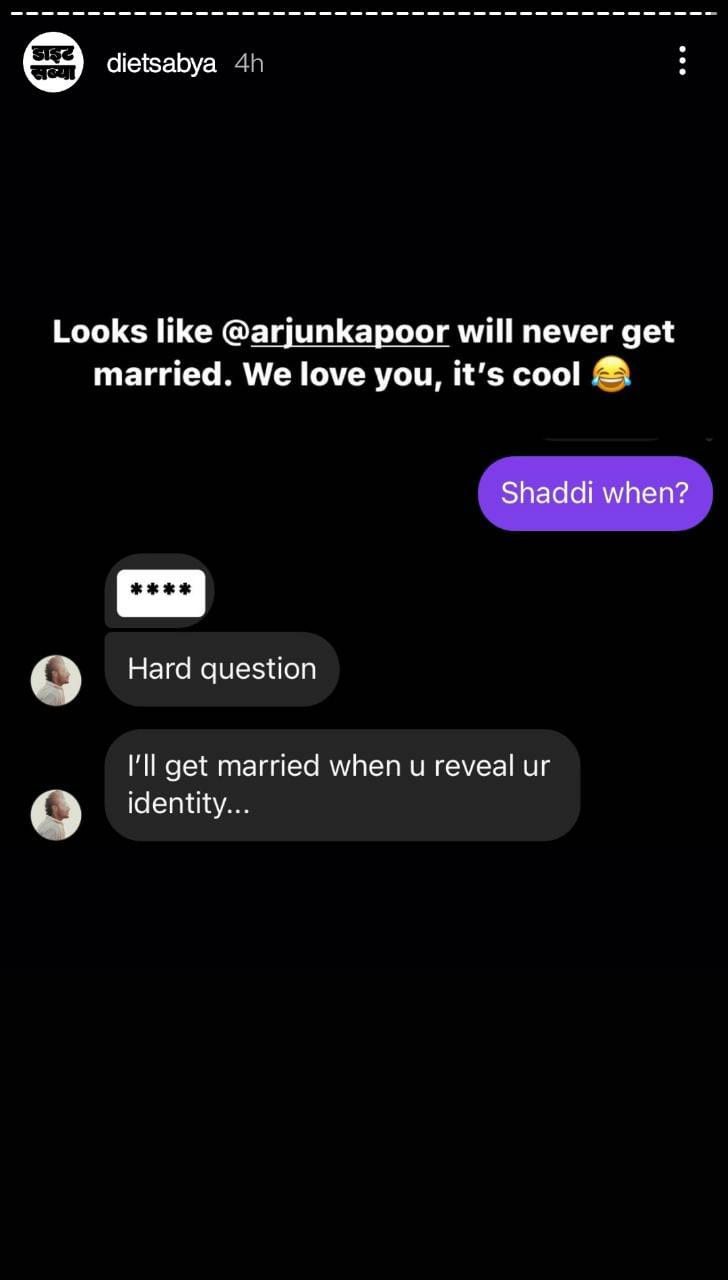 Arjun Kapoor Reveals When Will He Marry Malaika Arora

Arjun Kapoor and Malaika Arora have been dating each other for a while now. They made their relationship official in 2019 and since then, they share several love-filled pictures with each other on social media.

Recently, Arjun talked about his relationship with Malaika Arora and mentioned how her entry into his life has made him a better person. He also talked about facing trolls for being in a relationship with Malaika and added how everyone has an opinion on their dating life. “It hurts you temporarily and then you put perspective by realising that you’re strong enough to face so much more than nameless, faceless people on social media spewing hate. You’ve to let them be. I guess there’s so much relevance to Malaika and my relationship that everybody wants to have a say, have an opinion and you can only take that as a compliment that everyone likes talking about us!” the actor told HT City.

On the work front, Arjun Kapoor is gearing up for the release of Ek Villain Returns. The film is directed by Mohit Sure and also stars John Abraham, Disha Patani and Tara Sutaria in pivotal roles. The film will hit theatres on July 8, 2022. Apart from this, if reports are to be believed, the actor has teamed up with director Mudassar Aziz for a light-hearted comedy film that will be produced by Vashu and Jackky Bhagnani.