Telugu actor Allu Arjun is currently enjoying a blissful holiday with his family in London. Over the last few days, both Arjun and his wife Sneha Reddy have been sharing a glimpse of their kid-friendly holiday on social media by posting pictures. While the Arya star has been sharing delightful glimpses from their family outing, now the actor’s wife Sneha Reddy is treating fans to insights from the family holiday.

In the pictures posted by Sneha on Instagram, we see the fam making memories during the trip. In the first photo, we see Ayaan and Arha posing inside a red phone booth in the city. The next snap is a capture featuring the kids posing with a giant Shrek figure. One of the pics featuring her husband with son Allu Ayaan was originally posted by Allu Arjun. The father and son both looked dapper in white, while Sneha posed in a printed top and white denim. 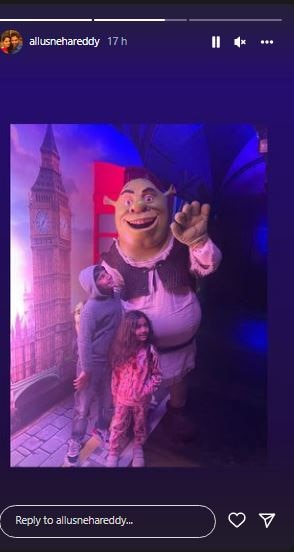 Well, this isn’t the first time we are seeing the Sarrainodu star’s kids in the pictures from their holiday in London. Earlier on Wednesday, Allu Arjun shared pictures of his children from their ongoing trip. The first picture he shared was of his daughter Arha from their chartered flight. Sharing the picture, Arjun wrote: “My angel in the sky.”

For those unaware, Allu Arjun married Sneha Reddy in 2011. The couple has two kids-daughter Arha and son Ayaan. In April, Arjun was on a European holiday with his wife and some friends. He celebrated his 40th birthday on this trip and shared several pictures from the celebrations.

Meanwhile, on the professional front, Allu Arjun was last seen on screen in 2021’s blockbuster Pushpa: The Rise. In the film, he played a lorry driver turned sandalwood smuggler. The film grossed over ₹300 crore worldwide. Its Hindi-dubbed version alone minted over ₹100 crores. The film also starred Rashmika Mandanna and Fahadh Faasil, and featured Samantha Ruth Prabhu in a special number Oo Antava. The song was one of the biggest chartbusters of the year.

Allu Arjun and Rashmika Mandanna-starrer Puspa: The Rise was a blockbuster hit. Now, fans are desperately waiting for Pushpa: The Rule to hit the theatres. The sequel has been making headlines as several details and rumours concerning it are doing rounds on social media.
Pushpa: The Rule will continue narrating the story of the rivalry between Pushpa Raj and IPS Bhanwar Singh Shekhawat, played by Fahadh Faasil. The second part will also mark the conclusion of this rivalry. Samantha Ruth Prabhu’s song was the highlight of Pushpa: The Rise. Many reports suggest that instead of Samantha, Disha Patani will be roped in for the sequel.