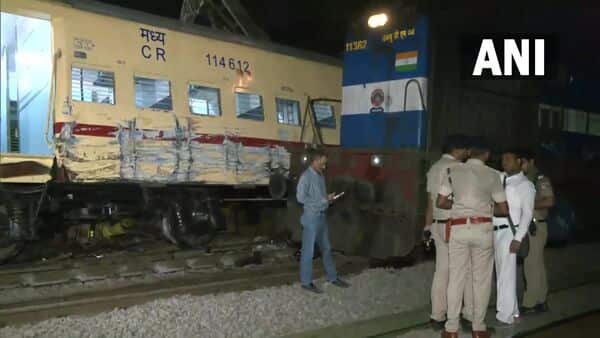 Three coaches of the Dadar-Puducherry Chalukya Express derailed near Matunga station in Mumbai on Friday after a minor collision with Mumbai CSMT Gadag Express,however, in a relief no injuries were reported.

“There has been a minor collision between Chalukya Express and Mumbai CSMT Gadag Express, near Matunga Railway Station. No injuries reported yet. Suburban trains are running,” said Railway CP.

The Dadar-Puducherry Chalukya Express was entering on DOWN fast line from platform 7 of the Dadar Terminus, when the CSMT-Gadag Express, which departed around 9.30 pm, dashed it from the rear side on a crossing, the official said. A video of the incident which went viral on social media showed that the coaches of the two express trains brushed against each other before the derailment. Some passengers can also be heard alerting each other while this happens.

B K Dadabhoy, Additional General Manager of Central Railway said that seven to eight hours will be needed to solve the derailment.

Shivaji Sutar, chief public relations officer (CPRO) of Central Railway, said that relief trains had been sent to the site.

“We received info at around 9:45 pm (April 15) of the derailment of three coaches of 11005 Dadar-Puducherry Express near Matunga Station; no casualty was reported. We immediately suspended the adjacent line traffic due to safety reasons,” he said.

The traffic on the Up and Down slow line, which was suspended for some time for safety reasons, had been restored, he added.

“But at around 10:45 pm (April 15), we restored the slow line traffic; suburban trains are running on slow lines. The derailed train is on the fast line. We’re trying to restore the 3 coaches and fast line traffic as soon as possible. All relief trains are on the site,” said CPRO.

He further said that the cause of the incident will surface post the probe.

“We will try to restore the fast line till the morning. An investigation of this derailment will be done, it won’t be right to say whose fault was it for now. The cause of the incident will surface post the probe,” said Sutar.

Quaiser Khalid, Railway Commissioner of Police visited the site and said that all the passengers are evacuated and they are safe.

“Visited the accident site at Matunga. We are taking Gadag express to Dadar RS. All passengers and their belongings are safe. Chalukya/Puducherry Express passengers evacuated. Restoration of normalcy is underway. Damaged electric line and pole being restored,” said Khalid.

The Central Railway also issued a helpline contact number in view of the Dadar-Puducherry Express train derailment near Dadar.

Some of the trains arriving at Mumbai were also short terminated at Dadar station.

The Central Railways further informed that the suburban trains on Saturday will work as per the holiday schedule on the mainline only.