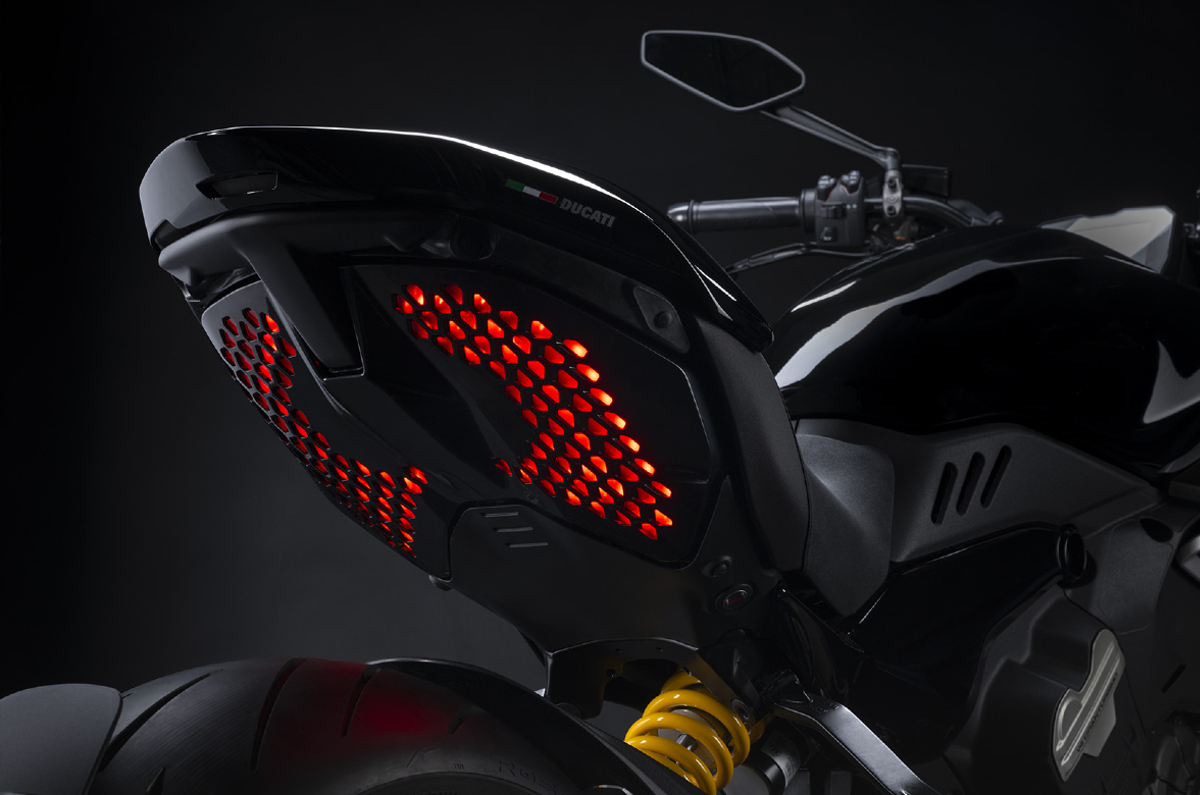 For 2023, the Ducati Diavel gets a revised chassis and suspension, and gains a more powerful V4 engine.

Ducati has revealed the new Diavel V4 and, as the name suggests, the biggest change for the power cruiser is the adoption of Bologna’s V4 Granturismo engine. But that isn’t all, Ducati has also given the Diavel significant styling and chassis changes for 2023. Let’s take a look at what those are.

In terms of design, the new V4 is unmistakably a Diavel. It still gets a muscular tank, large air vents on either side on the headlamp, a scooped seat with a slender tail section and that large rear tyre with a hugger, and a single-sided swingarm. However, the Italian manufacturer has made some significant changes for this new model.

The 2023 Diavel gets a new LED headlight with C-shaped LED DRLs, two-tone alloys with a diamond cut effect, while the rear light is now an array of small LEDs under the tail section, which mimic the C-shaped pattern of the DRLs up front. And to further increase the ‘wow’ factor of this motorcycle, Ducati has given it quad exhaust tips.

For this new model, Ducati has ditched the 159hp, 1,262cc V-twin engine from the outgoing Diavel 1260 in favour of the Granturismo V4 engine that does duty in the Multistrada V4. This 1,158cc, liquid-cooled V4 engine puts out 168hp at 10,750rpm and 126Nm of torque at 7,500rpm in the new Diavel. Interestingly, the V4 engine comes with a cylinder deactivation system, which shuts down the rear two cylinders as needed to reduce fuel consumption and heating. The engine is paired with a 6-speed gearbox which gets a bi-directional quickshifter.

Despite moving from two cylinders to four, the Diavel has gone down in weight by 13kg (211kg dry). And a major part of that is the chassis, which helps save 8kg. Instead of the steel trellis frame of the outgoing Diavel, Ducati has given the new Diavel V4 an aluminium monocoque frame that’s directly attached to the cylinder heads. The rear subframe however, is still a steel trellis unit, while the swingarm is a single-sided cast aluminium unit.

Suspension duties are handled by a 50mm USD fork up front and monoshock at the rear, both of which are fully adjustable. The travel is 120mm at the front and 145mm at the rear, which is 15mm more than the Diavel 1260. The Diavel V4 has a seat height of 790mm and Ducati has also brought the handlebar 20mm closer to the rider for more comfortable ergonomics.

While Ducati is yet to officially announce the Diavel V4’s arrival here, expect the new and updated power cruiser to make it to our shores in due course. And when it does, expect it to cost a good chunk more than the current Diavel 1260, which retails at Rs 20.49 lakh (ex-showroom, India).

Are you impressed by the new Ducati Diavel V4? Let us know in the comments section.