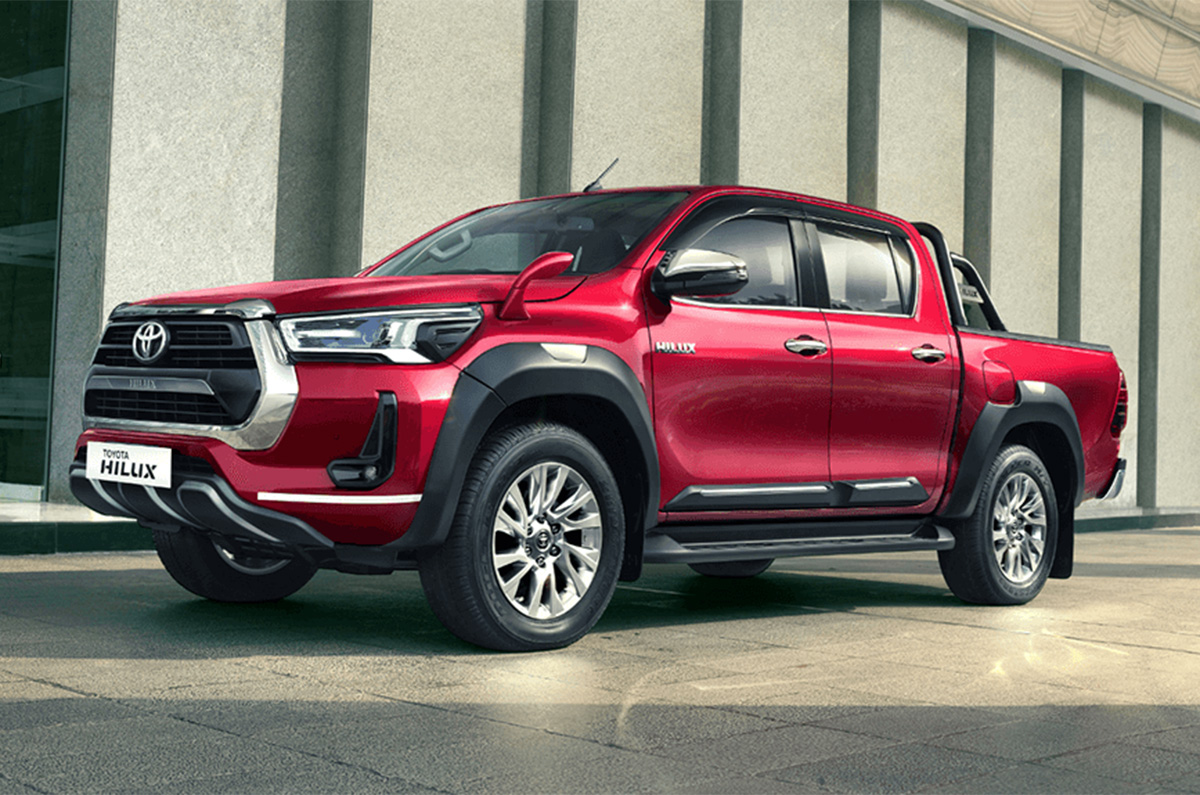 The Hilux shares its underpinnings with the Innova Crysta and Fortuner in India, and there’s some part sharing between these models.

The Toyota Hilux pickup truck has finally been launched in India today, with prices starting at Rs 33.99 lakh for the Standard MT trim and going up to Rs 36.80 lakh for the fully kitted High trim (ex-showroom, India). Bookings for the pickup truck have been open since January, with the booking amount set at Rs 1 lakh. The Hilux is being assembled in India with CKD kits at Toyota’s plant in Karnataka.

The Toyota Hilux for our market is the double-cab body style and it looks distinct and purposeful right from the onset. It also has some resemblance to the Fortuner in its basic profile, but it gets a completely unique face with a larger hexagonal chrome grille and swept-back LED headlamps. The front bumper is sharply styled, with black contrasting insets for the fog lamps, and it also gets a rugged looking skid plate.

When viewed in profile, the length of the Hilux becomes most apparent. It also gets beefy, black plastic cladding over the wheel arches, adding to the rugged appeal. At the rear, the Hilux looks like most conventional pickup trucks, although it gets a heavy dose of chrome to suit local tastes. The Hilux rides on 18-inch alloy wheels, similar to the Fortuner in India.

The Hilux shares quite a few interior trim and switchgear with the Fortuner in India. While the dashboard layout is slightly different from the Fortuner, things like the touchscreen, climate controls panel, instrument cluster, steering wheel and even the front seats are all shared. The all-black dashboard is well contrasted with some brushed silver and gloss black trims.

Under the hood, the Hilux carries over the 2.8-litre, four-cylinder turbo-diesel engine from the Fortuner in an identical spec of tune. That means the engine produces 204hp and 420Nm of torque (500Nm in case of the automatic). Just like the Fortuner, transmission options on the Hilux include a 6-speed manual or a 6-speed torque converter automatic gearbox.

However, unlike the Fortuner that is offered in both 4×2 and 4×4 configurations, the Hilux is available only in a 4×4 configuration. For improved off-road ability, the Hilux also gets a low-range gearbox, and front and rear electronic differential locks. It has an approach angle of 29 degrees and a departure angle of 26 degrees. Additionally, the Hilux has a water wading capacity of 700mm.

The Hilux is underpinned by the same, tough IMV ladder-frame chassis that is also employed by the Innova Crysta and the Fortuner.

The new Toyota Hilux is positioned in the niche lifestyle pickup trucks segment where its only rival in the Indian market is the Isuzu D-Max V-Cross that is priced between Rs 22.07 lakh-25.60 lakh (ex-showroom, Delhi).

Toyota is offering a standard warranty of three years or 1 lakh km on the Hilux, similar to almost every other Toyota product on sale in India. Buyers can also opt for the extended warranty scheme that go up to five years / 2.2 lakh km.

What are your thoughts on the pricing of the Toyota Hilux in India? Let us know in the comments below.