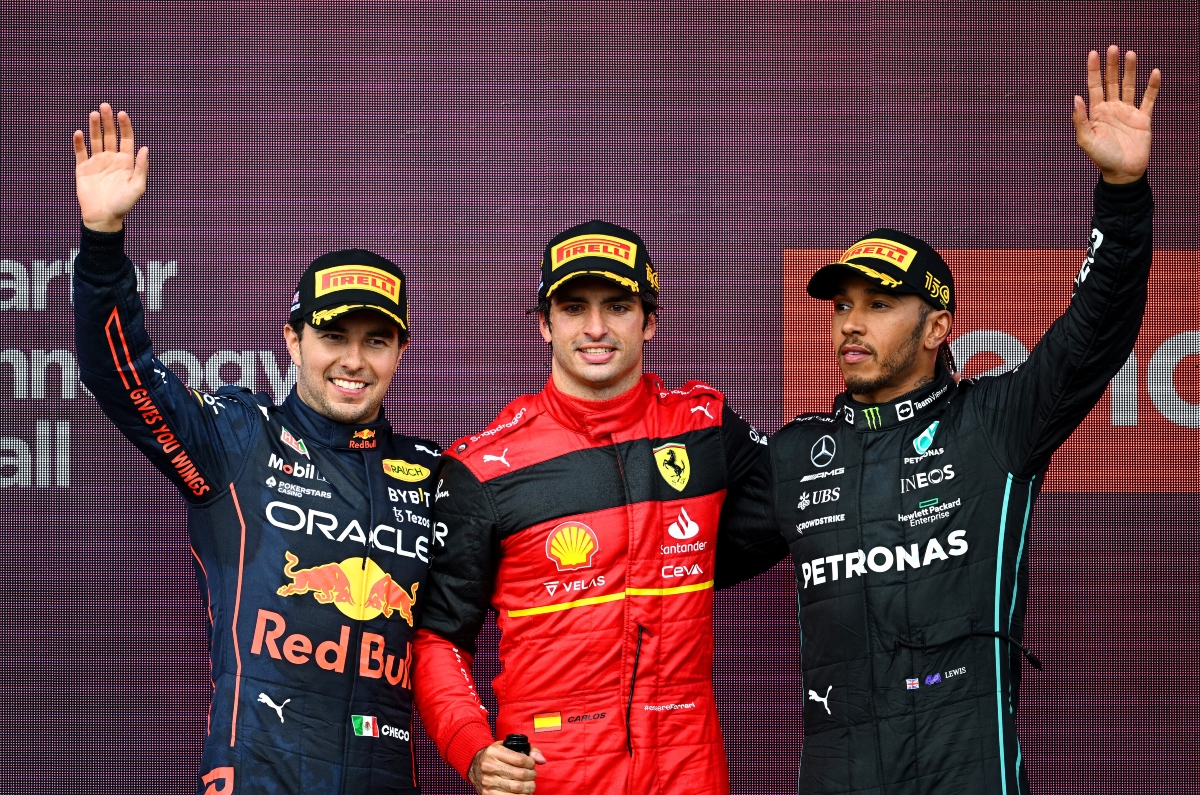 Perez and Hamilton on the podium; Verstappen seventh after car damage.

The British GP served up some spectacular racing, with Carlos Sainz, Charles Leclerc, Lewis Hamilton, Sergio Perez and Max Verstappen all looking like they had a shot at victory at some point. However, it was Sainz who emerged victorious at Silverstone, taking home his first-ever F1 win after a long wait of 150 races.

After some thrilling action in the closing laps, Perez ended up second ahead of Hamilton.

The race was red flagged soon after the start, as Zhou Guanyu barrel rolled into the barriers after being caught up in an incident involving Pierre Gasly and George Russell. After some tense moments, Zhou was extracted from the car and taken to the medical centre. Alfa Romeo has since confirmed that he has been declared fit and released from the circuit’s medical centre – a true testament to just how far safety measures have come in F1.

In a separate incident, Alexander Albon retired after being hit from behind by Sebastian Vettel. The FIA confirmed that he hasn’t suffered any major injuries and has been transferred to Coventry Hospital for precautionary checks.

Russell immediately stopped his damaged Mercedes to check up on Zhou. With the race red flagged, he was hoping to re-join the race. However, marshals had already retrieved his car and he wasn’t allowed to restart.

Sainz couldn’t defend his maiden pole position at the start, but the restart gave him another opportunity to do that. He succeeded this time around, only to go wide a few laps later, allowing Verstappen into the lead.

Verstappen was on the hunt for his seventh win this year, but picked up floor damage and suffered some serious performance loss as a result. This left the Ferrari drivers to squabble it out in front, with Hamilton closing in on the duo as well.

A pivotal point of the race came when the Safety Car was called out as Esteban Ocon stopped on lap 39. At this point Leclerc was in the lead, but Ferrari didn’t pit him, while both Sainz and Hamilton pitted for soft tyres.  Perez also joined the mix, having pulled off an impressive recovery after picking up damage on the opening lap.

At the restart, Sainz took full advantage of this to re-take the lead, while Perez got the better of Hamilton. Sainz then darted clear to pick up his maiden victory in F1 and Ferrari’s first since the Australian GP in April. 150 races in the making, this was the second longest wait for a win in F1 history.

“First race win, 150 races later, with Ferrari, in Silverstone. I cannot ask for more! It’s a very special day, a day that I will never forget, a very special weekend in general, and yes, thank you everyone for your support, for your cheers. Lewis was on it today, I heard. It was one of his days, but we managed to hold on and I’m incredibly happy,” Sainz said.

Perez vs Hamilton vs Leclerc

Fans were treated to some nail-biting laps of action as Perez, Hamilton and Leclerc tussled for position and traded places a few times.

Ultimately, Perez had the upper hand in this battle and ended up finishing second. Hamilton landed the final spot on the podium, while Leclerc had to settle for fourth place. Fernando Alonso scored his best result of the year so far, with a fifth place finish, followed by Lando Norris in sixth.

Despite a lackluster result, Verstappen continues to lead the standings by 34 points from teammate Perez. Leclerc, meanwhile, is 43 points off the lead.

The battle continues next week as F1 heads to the Red Bull Ring for the Austrian GP on July 10.