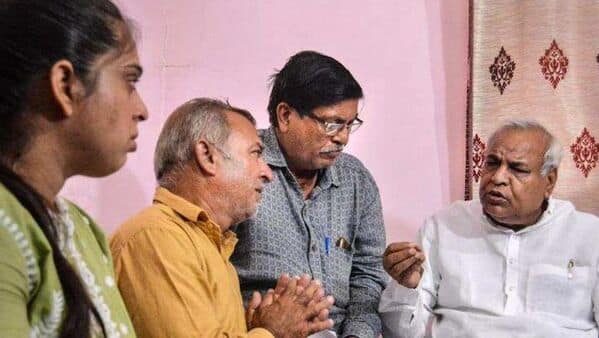 The family members of 16 Indian sailors, who were detained by the Guinea Navy, have appealed to the government for their safe return. The Indian sailors have been held hostage since August this year. Their families have urged the Indian government to make arrangements for an immediate release of the sailors.

Harshvardhan Savche, a resident of Vadodara, is among the 16 Indian crew of the ship detained by the Navy of Equatorial Guinea – a country located on the west coast of Africa.

As per the wife of Harshvardhan, Sneha Savche, “the Nigerian Navy took possession of his ship due to some technical reasons while he was on the way to the port of Nigeria for loading. He has been held hostage for the last three months.” Harshvardhan’s wife also said that he had also sent a video from the ship in the hostage situation.

Harshvardhan’s family is concerned about the safety of everyone as the seized ship has been illegally towed to Nigeria where they will be arrested. Harshvardhan’s wife is pleading with the Government of India to get her husband released and help him to get back safely.

Earlier, in a video message shared on Wednesday, the Chief Officer from MT Heroic Idun said that they “will be forcefully taken by arranging the tug boats”. The sailors have urged the Indian government to “save” them.

“We have got the info that the ship will be illegally towed from here to Nigeria, the government here is arranging for tug boats, this is an act of piracy. The ship is prohibited to sail from here by the flag state. Our flag state is the Marshall Islands. We have received instructions not to move out from here. So, we will be forcefully taken from here by arranging the tug boat. So this is the information I have received,” he said.

“The people from the ship, they are standing at the jetty. They will be coming any moment on board and the ship will be taken forcefully from here. We will not able to send any more videos. This might be our last video. We don’t know when the army comes on board the ship what they are going to do,” he added. The sailors carried placards “save us” and urged the government to save them.

CPI-M leader AA Rahim had written to External Affairs S Jaishankar saying that the crew of MT Heroic Idun includes 16 Indian sailors and they are being “allegedly illegally detained in Equatorial Guinea”.

“Since their detention in mid-August, this mission has been in regular contact with the crew members over the phone. We have also had several consular access/visits to them. We are closely monitoring developments and are actively engaged for an early resolution of the issue,” it added.